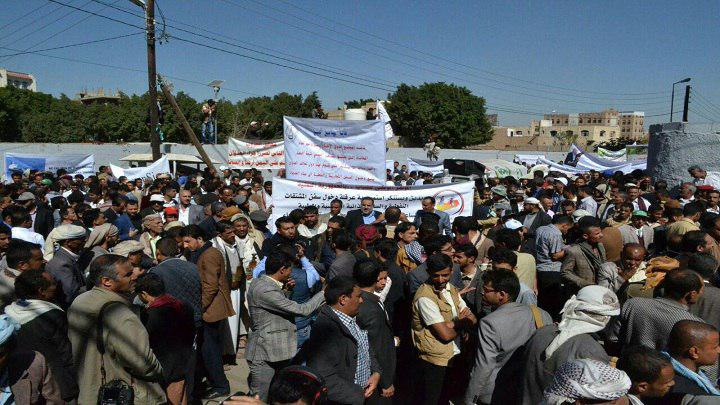 Yemenis protested in masses in front of the Yemeni oil company in Sana’a on Monday condemning the Saudi-led coalition preventing the entry of oil derivatives vessels.

The participants in the protest, which included the executive director of the oil company, Yasser Wahidi, and the leaders of a number of ministries and government institutions and organizations, bodies, unions and federations, lifted banners condemning the complicity of the international community towards the crimes committed by the US-backed coalition against the Yemeni people for nearly 4 years.

Furthermore, they denounced the Saudi-led coalition preventing the entry of oil derivatives vessels, medicines and food for the Yemeni people in a flagrant violation of norms, charters, and international and humanitarian laws.

At the protest organized by government institutions and civil society organizations today in front of the United Nations Office in Sana’a, different speeches called on the international community, the United Nations and the Security Council to stand by the Yemeni people, stop the aggression, lift the blockade and open land, sea and air ports for the entry of medicine, food and humanitarian aid.

Meanwhile, a statement issued by trade unions and civil society organizations called on the international community to put an end to the practices of the Saudi-led coalition and launch an urgent intervention to lift the siege and allow the entry of oil derivatives. He also called on the United Nations to take decisions that would neutralize the Yemeni economy.

The emergence of the al-Qaeda envoy in the consultations of Sweden .. this is what he achieved