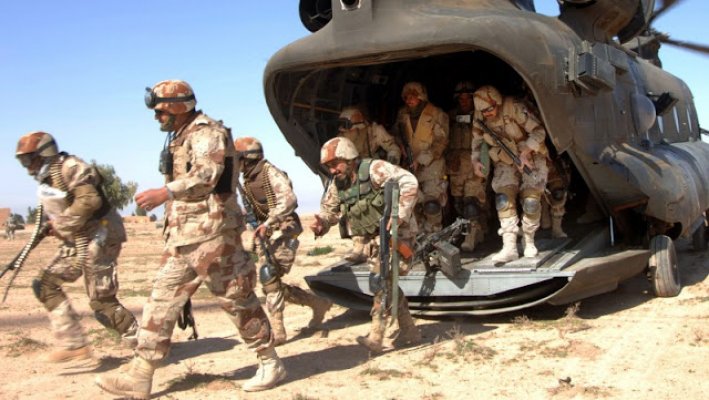 Since the beginning of the campaign of the so-called Arab coalition on Yemen, Britain has sold billions of pounds of weapons to Saudi Arabia and the UAE and provided logistical and intelligence support, while its warships have participated in bombing Yemen .. British and American statements of sending death squads revealed for  those who do not see in the field a pivotal role of Washington, London, and even Tel Aviv, in addition to that the leaders of Saudi Arabia and the UAE work as soldiers and agents ,loyal to America, Britain and Israel .

On May 31,2018 , London confirmed in a statement by its Foreign Minister Boris Johnson, who resigned last June, that it would participate in the campaign against Yemen by sending military forces to Saudi Arabia to protect it from what it described as serious threats coming from Yemen, while at the same time expressing its concern for peace and to continue to send weapons and fighters to the coalition.

Johnson did not object the truth when he said that the British military forces involved in the campaign did not fall under the so-called Saudi coalition, they are even bigger, they are the leaders of this war and the battle, saying that British troops stationed in Saudi Arabia are receiving orders from the British command. On November 21, British Foreign Secretary Jeremy Hunt said that stopping the sale of arms to Saudi Arabia would lose its country its influence over Saudi Arabia and its ability to influence a solution in Yemen .

About the dangerous role of the British in the war against Yemen, the commander of the revolution of 21 September 2014, Sayyed. Abdul Malik Badr al-Din al-Houthi, in an interview with the Lebanese newspaper (news), March 23, 2018, said that America and Britain are benefiting from the war on Yemen.

The head of the Supreme Revolutionary Committee, Muhammad Ali al-Houthi, also referred to the implicit British recognition of its involvement with America in the attack on Hodeidah, its attempt to occupy and destroy its ports and the artery of millions of Yemenis.”The British told us a week ago that the Emiratis and the Saudis have confirmed that they will not go into the battle of Hodeidah unless they agree and help them,” al-Houthi said in twittering on June 13 this year.

The newspaper “Daily Mail” British, in a report called the “dirty war”, and was published on November 27 last year, the role of London in the Saudi war on Yemen.The newspaper said that the British army is secretly training Saudi forces, and explained that more than 50 British soldiers are training Saudi soldiers on combat skills to fight in this (dirty war).
Crosswise included forces from the Second Battalion of the Royal Regiment of Scotland, whose mission was to teach IW techniques to officers from the Saudi Royal Land Forces Infantry Institute

Britain has launched its handover of the Yemeni file with a road map for the final solution in Yemen, which includes details, moves and meetings with the Yemeni parties, as what was done last year through the Paris Quartet. The map of the solution includes a complex state of six provinces, the appointment of a British envoy to manage the Yemen crisis, and other plans.
Since 2011 so far, many drafts and British projects submitted to the UN Security Council, in addition to the strong contributions of this kingdom led to the issuance of 9 UN resolutions, have had serious consequences for Yemen.

The latest British draft resolution to immediately stop fighting at the strategic port of Hodeidah gives the parties to the conflict 10 days to enter into an immediate humanitarian truce in Hodeidah and to remove all obstacles to the delivery of humanitarian aid to all areas of the country through this vital sea corridor, The project relies on the Saudi narrative, which claims to protect the army and the committees of citizens, in a blatant and offensive attempt aimed at justifying the crimes committed against civilians by the armies and mercenaries of the terrorist alliance, both past and future.

Britain’s efforts to control the coasts and islands of Yemen are not a new idea. For 180 years, Britain’s strategic policy has been to keep no force in the sea, which is the vital bar.Britain did not care to preserve the property of the sick Ottoman Sultan as much as it wished to preserve its political, military and commercial interests in the southern Red Sea, specifically Aden.

With the start of the French campaign on Egypt in 1798, the British view turned to the importance of this sea, and worked to extend its political and military influence, and even trade in the Red Sea, so when the face of Egypt’s ambitious ruler Mohamed Ali Pasha on The Red Sea coast, Britain quickly occupied Aden by force in 1839, entered  a conflict with Italy and Germany on the islands of Yemen in the Red Sea (Myon, Hanish, Zaqr and Fursan), and tried to drag and pull the northern island of Kamran to the south, to be under its control.

But this British policy has changed formically during the last four decades, whereas roles have changed with the American ally and the Israeli side to control the sea .. Today, Britain with major international forces is trying to change the geopolitical situation of the international corridors and the Yemeni coasts through the occupation of the south.

The control of Bab al-Mandab , the occupation of the port of Al-Mukha and the threat of occupation of the port of Hodeidah or trying to put it at the disposal of the United Nations .. All this part of this old  colonial project.Since the departure of Captain Haines’ descendants from Aden on November 30, 1967, as a result of the armed struggle of Yemenis, the south of Yemen has not emerged from the British circle of interest. The British kingdom has remained in this land by planting and developing its clients in Yemen. Abed Rabbo Mansour Hadi, who came to power as interim president, and the latest downfall of another client named Yasin Saeed Noman, who since 2014 has been ambassador to Yemen in the capital of the United Kingdom.

According to observers, the kingdom still intends to return while various ways to the south.Last year, a Saudi force called the Commando Brigade was formed and supported by thousands of southern fighters who were selected according to special criteria. They were trained intensively and assigned joint military tasks on the Yemeni coast and territorial waters, which aren’t under the control of the Yemeni authorities, loyal to the coalition.
The British Navy oversees these joint forces, which are based at the headquarters of the Yemeni Naval Forces in Tawahi, Aden.

In this sense,they added,  the UAE and Saudi forces in Aden are working to keep the south disintegrated and subjected to irregular armed groups with regional and tribal affiliations to ensure the continuation of the social instability, so that Bab al-Mandab and the Yemeni coasts and islands remain under the supervision of the British Navy.

Today,they confirmed, the southern and eastern provinces have become under the treacherous and cowardly Arab occupation that used deceptive addresses, such as the pretext of legitimacy and others, as a conduit for penetrating the land of the South, controlling its wealth, and destroying its resources.

Between the departure of British troops from southern Yemen in 1967, and the entry of Saudi and UAE forces in the past three years, they stated, faces have been only changed  , and the roles have not been changed, the occupation is in direct and indirect methods, looting its wealth and dispersal of its forces , and making up between its political components strife and differences, following the policy of mined land.

They concluded with saying that the south of Yemen , today, witnesses undone independence in terms of its geopolitics and political concepts, and to sum up , that Britain, the country that occupied this part of the Yemen turned into a sponsor state of the occupation, which took an Arab character this time, whereas Britain supports the coalition countries in the war and its expansion to the south and north.

In March 2015, the US -backed –Saudi-led coalition started  a war against Yemen with the declared aim of crushing the Houthi Ansarullah movement, who had taken over from the staunch Riyadh ally and fugitive former president Abd Rabbuh Mansur Hadi, while also seeking to secure the Saudi border with its southern neighbor. Three years and over thousands dead and injured Yemeni people and  prevented the patients from travelling abroad for treatment and blocked the entry of medicine into the war-torn country, the war has yielded little to that effect.