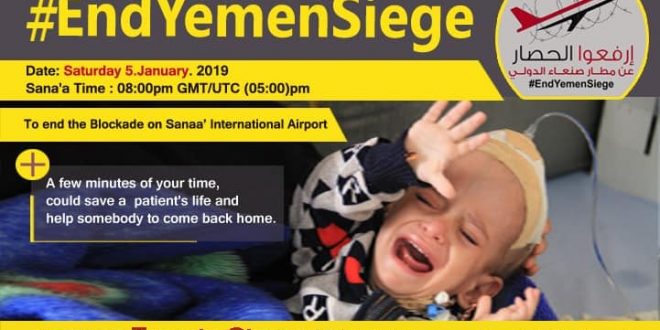 On Jan 6, 2019
331
Share
YemenExtra
SH.A.
International aid organizations in Yemen are calling on all actors to lift restrictions on Yemeni airspace and allow for the reopening of the country’s main airport.
The impact of the decision to close the airport on the lives of Yemenis has been severe, the Ministry of Health (MoH) estimates that more 10,000 Yemenis have died from critical health conditions for which they were seeking international medical treatment, but were unable to do so due to the airport closure.
Denial of access to travel has condemned thousands of Yemenis with survivable illnesses to death,” said Mutasim Hamdan, the Norwegian Refugee Council’s country director in Yemen.
Prior to the conflict, an estimated 7,000 Yemenis were travelling abroad from Sana’a each year to access medical treatment (OCHA). Because of the unrelenting violence, Yemenis awaiting critical medical treatment abroad now have to find alternative routes to leave the country, which include a 10-20 hour drive to other airports, often through areas where active fighting takes place.
The closure of Yemen’s main international airport also negatively affects the speed at which humanitarian organizations can deliver much needed commercial supplies and humanitarian aid to the roughly 20 million Yemenis in need of it, nearly all humanitarian organizations are forced to rely on the UN Humanitarian Air Service for travel in and out of the country.
More than 54,000 people have been killed or injured since the escalation of violence in 2015, the aid groups said in their statement, a cholera epidemic, which began in April 2015, has infected more than 425,000 people and killed 1,900, according to the UN, last month, a revised UN humanitarian assessment said the number of people in need of assistance had risen from 18.8 million to 20.7 million, a figure equivalent to almost three-quarters of the total population. Restrictions imposed on Yemen’s airspace by the Saudi-led coalition led to the official closure of Sana’a International Airport to commercial flights on 9 August 2016. No commercial traffic has since been allowed access the airport, including to carry Yemenis who need lifesaving medical treatment abroad.
The airport has instead become the site of frequent aerial bombardments, more than Fifty-six coalition airstrikes have been dropped on the airport complex over the last two years, according to the Yemen Data Project, damaging critical infrastructure and threatening the safety of surrounding communities.
This situation violates the freedom of movement of the population, a human right safeguarded in article 13 of the Universal Declaration of Human Rights, Yemeni people find themselves in a very restrictive situation to travel abroad to seek medical attention, study, conduct business or visit relatives.
All channels of domestic and international movement should therefore be reopened immediately. Four years of war have decimated Yemen’s already-fragile health system, fewer than half of all health facilities are operational, some 16 million Yemenis need humanitarian assistance to access basic healthcare. Insufficient water infrastructure and high rates of malnutrition have left people extremely vulnerable to disease, including a third wave of cholera.
“This war is killing not only by bombs and bullets, but a plethora of illnesses for which people are being denied access to healthcare,” said Mohamed Abdi, Country Director of the Norwegian Refugee Council in Yemen.
Over 60,000 people have been killed or injured since the escalation of violence in 2015, over a million civil servants have not been paid salaries almost two years, causing the slow collapse of public services and swift escalation of the world’s largest humanitarian crisis.
“Millions of Yemenis now effectively live in an open prison between hostile borders and front lines of war, as long as the airport is closed, so is the single safe route to lifesaving medical treatment.”
Written by Mona Zaid
Continue Reading
airstrikesattackcoalitioncrimeshumanitariannewsSaudiSaudi-led coalition
331
Share FacebookTwitterGoogle+ReddItWhatsAppPinterestEmailLinkedinTumblrTelegramPrint

What you need to know about the most humanitarian crisis in Yemen, Yemeni missiles in Taiz!