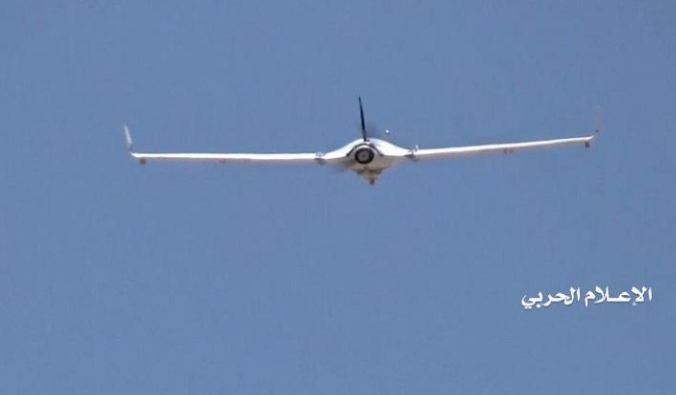 March jets… The horror that makes the enemy rush into its hideout!

The march aircrafts enter the battle

On February 26, 2017, in seven hundred days of the war, the Ministry of Defense’s Military Industrialization Department uncovered about  four aircrafts of a local production called “Qasif 1”, which is for attacks and three others for reconnaissance “Rased, Raqeeb and Hudhud 1” . The killed president , Saleh al-Samad, attaended the first exhibition of unmanned drones, which consisted of prototypes of Yemeni UAVs that carry out combat and reconnaissance missions, survey and evaluation work and early warning work.

Martyr Al-Samad considered this achievement to be the strongest and most expressive of the Yemeni spirit and the unique, distinctive, strong and cohesive personality of Yemen, asserting that the aggression failed to break the Yemeni psyche, which faced the challenge with challenge, patience,.

Equipped with the latest photographic technology
has a small size and small radar section, which make it difficult to detect, track and try to shoot  it by air defense missiles
Characterized by a small amount of thermal radiation, which reduces the probability of being infected with infrared guided missiles
has a quit acoustic sound that makes it difficult to hear and hum  in the atmosphere of your battle

A new qualitative achievement formed a strong start to a new stage in the battle , responding  and a turning point in the course of military operations. This achievement shifted the level of confrontation with their enemy to advanced stages and turned their enemy’s papers upside down, since he hasn’t yet wake up from  the shock of Yemen’s possession of march aircraft to get surprised of that Yemen already owns aircraft that can reach the capital of its kingdom .The military industry unit of the Yemeni army forces revealed on Wednesday, 18/6/2018, “Samad 2” aircraft ,launching the first operation on March with Samad 2 by  targeting the Saudi capital ,Riyadh.

Only a week later, on Thursday, July 26, 2018, the Air Force unveiled a new system of “Smad 3”, which launched its objectives by bombing the Abu Dhabi International Airport in the UAE with air raids.

On 13/1/2019 was the discovery of 100% Yemeni Qasif2 aircraft, a Yemeni industry by 100%, afragmented and manufactured in a way that can not be captured by radar systems and monitoring as well as interceptor systems and it explodes at a height of 10 to 20 meters .

The aircraft was subjected to several experiments and the Yemeni army forces have strategic stocks of it .In addition, there is a disclosed second and third generation of the same type so far.

A thousand , five hundred and thirty offensive and reconnaissance operations of the air force

The entry of the march air force  in the battle reinforced the objectives of the missile force, whereas more than 300 military targets belonging to their enemy were monitored and identified which were added to their targets , which also can be targeted with appropriate weapons if the leadership decided to do so, including those targets used by Saudi and UAE military leaders and legitimate targets to Yemeni  forces are not limited to Yemeni territory but extend to the capital of the Saudi regime and to the Emirate of Abu Dhabi,” said the Yemeni Brig.

The Israeli entity afraid of the march aircrafts

The voices in Tel Aviv have risen in its research centers of various types, whether security or military, which warned of the growing capabilities of the march air force of the Yemeni army forces after the qualitative operation at Al-Anad base and the specific operations in the Saudi depth. The Jerusalem Center for Community and State Studies in Tel Aviv, Gold agent of the former foreign Zionist said thet the ability of the so-called “Huthis” to cause significant damage with an unmanned attack aircraft must concern the military and political leaders in “Israel”, considering the killing of a number of senior Saudi officers in Assir and other paid fighters leaders at the base of Anad as the evidence that Yemen has become a front area against “Israel.Michal Segelwho is the director of the Iranian file in the Research Brigade of the Israeli intelligence division and is currently an adviser to a number of foreign companies operating in the Gulf countries focused in his article on the ability of the Yemeni army forces to gather accurate intelligence, in addition to the ability of the march aircrafts to carry a large amount of explosives, so that the fragmentation explode and fragments spread at a distance of tens of meters, which may increase the impact of attacks and opens the way for Hamas to use such aircraft to target the Israeli camps and settlements located in the vicinity of the border, according to Segel expectations.

In the beginning of August 2018, Netanyahu appeared in a speech during the graduation ceremony of a regiment of Israeli officers in the Navy in Haifa, “confirming that they are willing to participate in an international coalition in the Red Sea in the event of the closure of the Strait of Bab al-Mandab in reference to what they call Iran’s attempts to encircle Israel in the Middle East.

The most prominent operations of the march air force

This targeting is one of the strongest attacks received by the Saudi regime and those in its orbit, as a new weapon that enters the battle of the “Smad 2” aircraft, which targeted the Aramco refinery in Riyadh, Saudi Arabia, causing fire in the company buildings while the Saudi regime announced that it was able to extinguish a fire in one of the tanks of Riyadh refinery which approved that the aircraft  achieved its goal, and which could not hidden. as well as many sections in social networking sites were spread to show the moments of combustion of the refinery and the difficulty of controlling the fire.

The arrival of the aircraft to Aramco in Riyadh was a violation of electronic warfare, air force and air defense because the operation followed the survey, identification and return of reconnaissance aircrafts while the Saudi regime knew nothing about it.

On Thursday, 26 July 2018, the march air force of the Yemeni army forces unveiled a new system of “Samad 3” targeting Abu Dhabi airport with accurate air strikes. The airport then administration quickly recognized what it was called an incident and said it was following developments from In close cooperation with the competent authorities, but the disruption of air traffic to and from Abu Dhabi airport revealed what happened

In an indirect way, hours later, the Emirates confirmed that there had been heavy casualties at Dubai airport following the strike by the Yemeni aircraft  Smadat 3. The UAE went on to confirm the precise damage at Dubai airport, when its jets launched more than a dozen air raids on Sana’a Airport and the Dailami Air Base.

.
The bombing of Dubai airport was a clear challenge for Washington, which had sent the head of the US defense firm Raytheon to reassure its tools in Abu Dhabi that they would remain safe.

The crash at Dubai airport has revealed the failure of US Patriot systems and defense systems that Abu Dhabi claimed to have bought from Australia to deal with the aircraft, to appease investors.

On Sunday, September 30, 2018, the march air force of the Yemeni army forces carried out another air attack on Dubai International Airport with a “Samad 3” aircraft, causing direct casualties. With this strike , the  aircraft proved the failure of the American protection systems and that it is a lie to loot Arab Gulf funds, especially because the operation was the second, after the first blow, officials in the UAE announced the purchase of American and Australian defense systems in order to reassure investors, but this strike proved that the American technology stood helpless in front of the Yemeni inventor.

On Thursday, January 10, 2019, the march air force carried out an air attack on concentrations of troops and paid fighters at Al-Anad Base in Lahj province. The strike led to a large massacre amid their enemy’s officers and large military battalions.