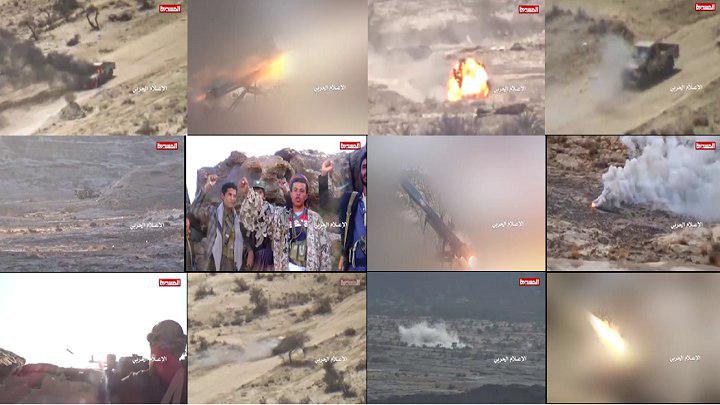 The Saudi-led coalition won’t leave Yemen before destroying it: Report

Yemeni army forces caused the Saudi-led coalition, backed by the US, big losses when they had launched separate offensives against their positions as it caused the most humanitarian crisis in the world.

The Military Media published special scenes of the coalition’s losses in Alab Crossing in Aseer. Yemeni army forces targeted gatherings and fortifications of the coalition’s paid fighters with a number of short-range missiles, Zilzal 1, and artillery shells, causing direct casualties.

The scenes showed the destroying of an armored vehicle with a guided missile and burning 3 Saudi military trucks. It also showed running out a large number of the coalition’s paid fighters.

On April 9, the Sniping Unit of the Yemeni army forces killed and injured 52 of the coalition individuals with sniping operations in different frontlines during the last 48 hours.

A source in the Sniping Unit stated that 52 of the coalition’s paid fighters and Saudi soldiers were killed and injured, including 24 in the border frontlines.

At least 13 people were killed and 92 others sustained injuries after the coalition warplanes launched aerial assaults against an area in Sa’wan district, close to a school, in Sana’a province on Sunday evening.

The Public Health and Population office in the province of Hajjah confirmed an increase in the number of Cholera cases during the past few days due to a third pandemic spreading through out the province. According to a report by the office, the death toll of Cholera patients during this season reached 25 people, while the number of reported cases is about 15,373.

Ministry of Planning and International Cooperation said that according to the results of the integrated analysis of food security, more than 53 percent of Yemen’s population are severe food insecure,  which requires urgent intervention to meet food needs.

Minister of Planning, Abdulaziz Al-Kumaim, said in a meeting of the committee charged of raising the level of nutrition in Yemen that  the issue of food security tops the priorities of the government agenda. The efforts are aimed at mobilizing the potential to mitigate the consequences of the food problem in Yemen, he added.

On April 10, the spokesman of the Yemeni army forces, Brigadier Yahya Sare’e, said that the coalition and their paid fighters continue their intensive violations in Hodeidah, committing 1221 violations during the last week. In a statement to Saba News agency, he said that “the US-Saudi mercenaries targeted by 416 artillery shells, 16 missiles, 415 bombs and 262 movement operations, farms and Yemeni Army’ sites in several districts.” He explained that the fighter jets and reconnaissance continued to fly intensely over Hodiedah city and other districts.

The Supreme Economic Committee held the pro-government and the so-called its economic bloc responsible for all the humanitarian consequences and the disastrous effects of preventing the entry of oil vessels, explaining in a statement that the so-called economic bloc in Aden has been lying to cover its systematic abuses against the Yemeni people and depriving them of oil derivatives.

The popular protests continue in Front of the United Nations Office in Sana’a for the seventh consecutive day to demand the release of the nine oil vessels detained by the coalition.

The participants in the vigil, that followed Friday prayers, confirmed that this protest comes to denounce the actions of the coalition in detention of oil vessels and not allowing them to enter Hodeidah port, stressing in a statement, that these arbitrary actions aggravate the humanitarian crisis, which has been the world worst due to the war and siege.