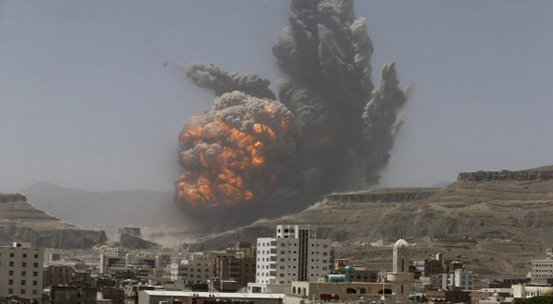 Saudi Arabia and the United Arab Emirate (UAE) are massively using French-made weaponry in the Saudi-led coalition, backed by the US, war on Yemen, a disturbing fact that contradicts public statements from Paris, according to classified document of the French government.

France, the third-biggest arms exporter in the world, provides to the Saudi Arabia and the UAE with a large various kinds of weapons .

The Disclose report, however, said according to the DRM note, which was provided to the government in October 2018, 48 CAESAR artillery guns, manufactured by the Nexter group, were being used along the Saudi-Yemen border by the Saudi-led coalition.The document, containing lists of French-manufactured weapons sold to both Saudi Arabia and the UAE, also revealed that Leclerc tanks, a main battle tank built by the Nexter and Mirage 2000-9 fighter jets sold in the 1990s to the UAE, have been used in the imposed war against Yemen.

The DRM military intelligence agency concluded saying that Cougar transport helicopters and the A330 MRTT refueling plane have been used in action, while two French ships are aidinf in the seige of Yemeni ports which has led tolack of food and medical items.