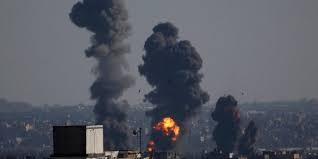 What in Yemen’s Hudaydah come under fire!

Herve Verhoosel, the WFP’s senior spokesperson, said in a statement on Friday that gunfire had hit the Red Sea Mills silos, which contain some 51,000 metric tons of grain — enough to feed 3.7 million people for a month — on Thursday, just days after aid staff gained access to the site.

The UN agency is still assessing the damage from the attack, Verhoosel said, adding that the WFP was unaware who was behind it.