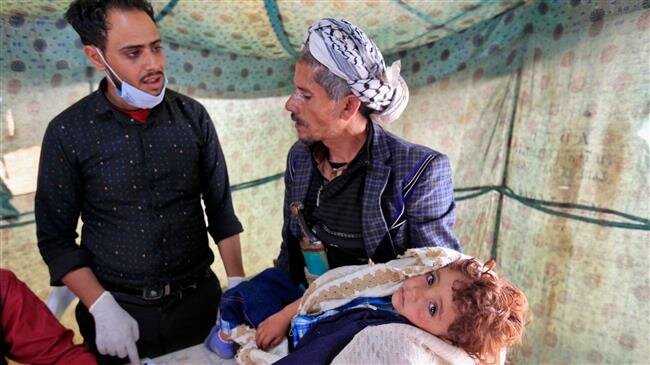 The suffering and pain in the hospitals and voluntary camps, in Al-Dhalae and Al-Baidha provinces, are filled with patients due to the cholera epidemic. It has been difficult for health facilities to face in the absence of the role of health and humanitarian organizations. The Saudi-led coalition, backed by the US, and its continuous siege over the past years has left a heavy burden on the health system in these governorates. Hospitals lack the most basic medical supplies amid the spread of epidemics and diseases. The number of cases of cholera in one of the camps reached more than 3000 during the last two months.

This is a crime. The coalition and its siege silently and deliberately with international supervision are killing the Yemeni People for the past 4 years.

The UN office for humanitarian affairs (OCHA) said that 108,889 cases were reported between January 1 and March 17, including 190 related deaths.The OCHA said children under five years of age account for nearly a third of the reported cases.

“Fears that the world’s worst cholera outbreak could be set for a massive resurgence are growing,”Oxfam International said.The relief organization ,last month, recorded around 195,000 suspected cases of cholera so far this year.

Cholera is an acute diarrheal infection that is spread through contaminated food or water. It can be effectively treated with the immediate replacement of lost fluids and salts, but without treatment it can be fatal.