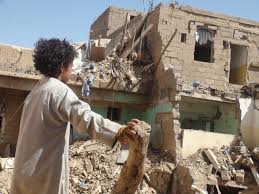 Taiz city is the scene of the coalition’s crimes

The Saudi-led coalition, backed by the US, continues to commit its crimes against the Yemeni people in Taiz. While there is shameful international silence.

The United Nations humanitarian coordinator in Yemen, Lize Grande, condemned all violations of international humanitarian law in Yemen, most recently the attack on a gas station in Taiz province, which killed and wounded more than ten people, including children.

The United Nations coordinator said in a statement that on May 24, 12 civilians were killed when a fuel station attack in Mawiya district, east of the city of Taiz, and the death toll included seven children.

“The loss of innocent lives continues in Yemen as a result of this conflict,” Grande said. “It is almost certain that real numbers are higher.”

National Delegation Head Mohammed Abdulsalam said on Friday that the today’s massacre of the coalition in Taiz, in which more than dozen were killed, including children, is added to the criminal record of the coalition against the Yemeni people.

“Another massacre is being added by the criminal record of the aggression against the Yemeni people,” Abdulsalam wrote on Twitter.

A local authority of Taiz province on Saturday strongly condemned the Friday’s terrible crime committed by  coalition’s air strikes against citizens in the province, sayinf that the crime would be added to a series of crimes and violations committed by the coalition against children, women and destroying infrastructure of the Yemeni people.

Yemeni Women in , for their part, Taiz organized a protest, condemning the coalition’s crimes on Yemeni People.

Last year, an official source in the Yemen Foreign Ministry condemned the attack on a vehicle belonging to the International Committee of the Red Cross (ICRC) delegation in the province, which killed one of the Mission’s staff members.The source expressed the deepest condolences to the ICRC, the family of the deceased and his colleagues.

He pointed out that this incident, which occurred in the area controlled by the paid fighters of the coalition, deliberate and aimed to limit the work of humanitarian organizations.The source concluded by praising the sacrifices of the humanitarian workers to serve the Yemeni people and alleviate their suffering caused by the war and siege.

The coalition also launched air raids in Damna Khadeer district in Taiz gvernorate. It caused killing and injuring about 20 civilians.

How do the Yemeni army forces harm the Saudi-led coalition?

92 Breaches by the Saudi Aggression of Sweden’s Agreement in…