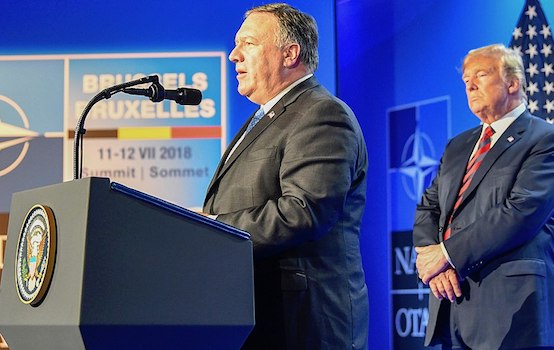 Mike Pompeo is on a trip to Saudi Arabia and the UAE this week, and while he was visiting he chose to repeat some of his more egregious lies about Yemen:

Pompeo on origins of Yemen’s civil war. “Some want to portray the Yemen conflict as an isolated civil war, without a clear aggressor. It is neither. It is spreading conflict and humanitarian disaster that was conceived of and perpetuated by the Islamic Republic of Iran.”

64 people are talking about this

Pompeo is being wildly dishonest here. The conflict in Yemen began as a civil war and still is to some extent a fight between different Yemeni factions. The Houthi/Saleh alliance were responsible for sparking the conflict, but there has also been international aggression against Yemen committed by the Saudis and the UAE in support of the desposed Hadi government. It was the Saudi-led intervention beginning in March 2015 that significantly escalated and intensified the conflict, and it has been their blockade and economic war against Yemen over the last four years that have driven the country into the abyss. Iran has very little to do with any of this. Iran certainly didn’t “conceive of” these things, and Iran isn’t the one “perpetuating” them. It is especially perverse to pin the blame for Yemen’s suffering on Iran when it is Iran’s regional enemies that have been destroying and starving the country ostensibly in the name of combating Iranian influence. That influence has been exaggerated from the start to provide an excuse for an indefensible and atrocious war, and the U.S. has shamefully indulged the Saudis and Emiratis by repeating this propaganda.

All parties to the conflict share some responsibility for the deteriorating conditions, but it is Pompeo’s hosts this week that bear the bulk of responsibility for creating the world’s worst humanitarian crisis. If anyone can be blamed for conceiving of and perpetuating the humanitarian crisis in Yemen, it is the Saudi and Emirati governments that the U.S. has supported for years. Pompeo’s habit of trying to pin everything that goes wrong in the region on Iran is tiresome, it is dishonest, and it gives the Saudis and the UAE a free pass to continue committing war crimes and starving the population. Every day that Pompeo represents the U.S. abroad, he brings shame and dishonor on his office and the country.