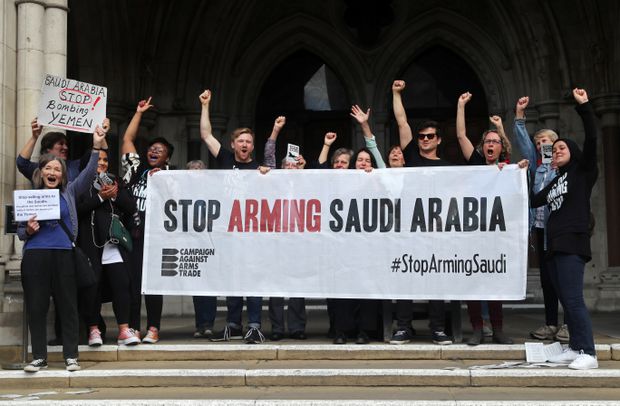 Human rights and arms control advocates are urging Prime Minister Justin Trudeau’s government to heed a growing Western backlash against the Saudi-led war in Yemen and stop existing sales of military goods to Saudi Arabia, including combat vehicles made in Southwestern Ontario.

The death toll since 2015 in Yemen is nearing 100,000, according to a new estimate prepared by the Armed Conflict Location and Event Data Project, a non-governmental organization that collects and analyzes data on political violence and protests. It counts the lives lost since the Saudi-led military intervention into Yemen started in March, 2015 – an effort to oust Iran-backed Houthi militias that had won control of key parts of the country.

A British court ruled this week that Britain broke the law by allowing sales of arms to Saudi Arabia that might have been deployed in the war in Yemen. While the court’s decision does not mean Britain must immediately halt arms exports to Saudi Arabia, it does mean there is a stay on the granting of new export licences to sell arms to the kingdom, Britain’s biggest weapons purchaser.

A week earlier, the Belgian government went further. It cancelled eight weapons exports licences for military equipment sales destined for Saudi Arabia, including, according to Belgium’s Le Soir newspaper, those allowing the export of CMI Defence’s armed turrets to Canada as part of a massive sale of Canadian-made combat vehicles to the desert kingdom. This deal, struck under the Harper government and approved for export under the Trudeau government, was originally estimated to be worth as $15-billion over 14 years.

In the United States, members of Congress, including Republicans, have been blocking sales of military equipment to Saudi Arabia for months, angry about the deaths of civilians in Riyadh’s air campaign in Yemen and the murder of dissident Saudi journalist Jamal Khashoggi at a Saudi consulate in Turkey last year.

On Wednesday, an independent report on Mr. Khashoggi’s death blamed the Saudi government and linked the killing to Riyadh’s deputy Crown Prince Mohammed Bin Salman. After a six-month investigation, the 100-page report by Agnes Callamard, the United Nations special rapporteur on extrajudicial executions, accused Saudi Arabia of a “deliberate, premeditated execution” and concluded “there is sufficient credible evidence regarding the responsibility of the crown prince demanding further investigation.”

Despite these developments, Canada continues to assemble and ship armoured combat vehicles, also known as light-armoured vehicles (LAVs), to the Saudi monarchy. Many of these vehicles are equipped with medium- or high-calibre gun systems supplied by CMI Defence of Belgium – armaments including a powerful cannon designed to shoot anti-tank missiles.

Photos and videos continue to circulate on social media showing Canadian-made LAVs engaging in skirmishes with Houthi militia in Yemen or even purportedly captured by Houthi fighters. The Canadian LAVs are easily identifiable because of their amphibious shape, distinctive triangular front corners and eight wheels.

In 2016, Global Affairs Canada recommended the Liberals approve the LAV export permits because the combat vehicles could help Riyadh wage war in Yemen. In a memo, it said the machines would help Saudi efforts at “countering instability in Yemen” as well as fighting Islamic State threats.

Doug Wilson-Hodge, spokesman for London, Ont.-based defence contractor General Dynamics Land Systems-Canada, which is making the armored vehicles, declined to explain how the Belgian export permit cancellation for turrets affects end production of the LAVs. “Nothing has changed with this contract. We continue to perform,” he said in an e-mail.

“The recent decision in Belgium … and the U.K. court ruling overturning the authorization of U.K. arms sales to Saudi Arabia for precisely that reason must, finally, become the wake-up call and impetus for the Trudeau government to end Canada’s disgraceful willingness to be potentially complicit in terrible abuses against civilians in Yemen,” Mr. Neve said.

“The government promised, last fall, to reconsider these export permits, but there has been no indication that has ever taken place.”

The Canadian government defended its record, saying it has already suspended approval of new weapons exports to Saudi Arabia. (This does not affect existing weapons exports such as the multibillion-dollar LAV deal.)

Mr. Austen said the Trudeau government has changed the export law by creating a new legal requirement that Ottawa must deny export permits “if there is a substantial risk that the export would result in a serious violation of human rights.”

“It has now been eight months since Prime Minister Trudeau expressed, with apparent resolve, that Canada would ‘not hesitate’ to freeze arms export to Saudi Arabia in the wake of Jamal Khashoggi’s murder,” Mr. Jaramillo said. “The UN special rapporteur’s report dramatically strengthens the case for halting arms sales to Riyadh – the question is whether the Canadian government will live up to its promise.”

Yemen’s basic services on the verge of total collapse