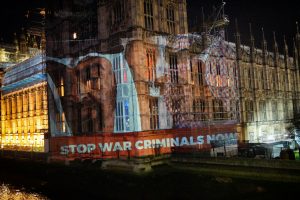 The video showed activists storming Mohammed bin Zayed’s residence at Four Seasons Hotel. They chanted slogans against his war and Saudi Arabia in Yemen and its crimes, describing him as a “war criminal.”

The activists carried banners and pictures of Abu Dhabi’s crown prince and the de facto ruler of the UAE, Mohammed bin Zayed, with phrases calling him “the devil of the Arabs”, “war criminal” and “wanted” for justice.

As they stormed Four Seasons Hotel before being deported by Swiss police, the rights activists shouted demands for the trial of Mohamed Ibn Zayed as “a murderer of children and civilians in Yemen, Libya and elsewhere”.

The UAE is facing mounting accusations from regional and international human rights organizations of war crimes in Yemen and Libya for funding armies of mercenaries for assassinations, arrests and torture.

This is reflected in the sit-ins and demonstrations in front of UASE embassies, consulates and the residences of their rulers in a number of capitals of the world, not least the visit of Ibn Zayed to Berlin.