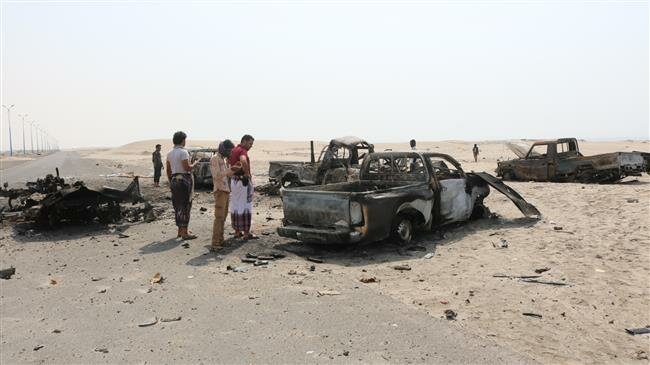 Southern Yemen burns , while the Saudi-led coalition escalates its clashes

The UAE , Saudi Arabia’s, paid fighters have continued to commit violations against citizens and Islah party’s supporters since they retook control over Aden city and others.

In a statement, the UAE’s Foreign Ministry said it had carried out air raids against “terrorist militias” threatening the Riyadh-led coalition “based on confirmed field intelligence.”

Paid fighters of the UAE-backed Southern Transitional Council raided the home of Sheikh Hani al-Yazidi, director-general of Boriqa district of Hadi’s government.A military patrol crew of the transitional council’s paid fighters raided the house, which al-Yazidi and his family had left in the past days, inspecting the house after storming it and looting its contents.

The reinforcements, including tanks, troop carriers and Katyusha rockets, came to back the Saudi-backed Hadi’s forces and Islah party (Muslim Brotherhood)’s paid fighters at Ataq city.

Unidentified gunmen on the same day blew up an abandoned headquarters of the UAE-backed southern transitional council’s paid fighters in Aqad area in Abyan province.

An independent human rights group says it documented 6,978 cases of grave human rights violations committed by militiamen backed by the United Arab Emirates (UAE) against civilians in the southern Yemeni provinces of Aden, Abyan and Shabwah during the month of August.

The Yemeni American Observatory for the Protection of Human Rights said in a statement on Sunday that its field teams had recorded the murder of 48 civilians, including six women and eight children, between August 2 and 30.