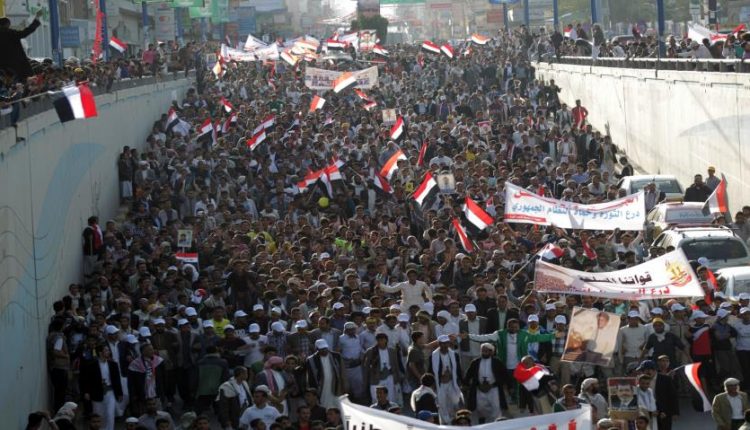 Tens of thousands celebrated, Saturday afternoon, in Bab Al-Yemen square in the capital Sana’a, the anniversary of the fifth anniversary of the September 21st Revolution in the march of Freedom and Independence. The participants waved banners and slogans of freedom.

On the eve of 5th anniversary the, the president of the Supreme Political Council, Mehdi al-Mashat, declared an initiative to achieve peace. He called on all Yemeni parties to engage in serious and genuine negotiations leading to a comprehensive national reconciliation that does not exclude any party, for the sake of building ties of fraternity and safeguarding the primacy of the higher national interests. The initiative was welcomed by demonstrators. They say it’s Riyadh’s last chance in case it’s serious about peace endeavors.

Leader of the Yemeni Revolution Sayyed Abdulmalik al-Houthi congratulated the Yemeni People by the fifth anniversary of the victory of the blessed popular revolution of September 21st, which was one of its most important achievements of liberating our people from foreign tutelage and restoring their right to independence, sovereignty and freedom.

The move came in a statement he issued on Saturday on the fifth anniversary of the September 21st revolution.

Sayyed Abdulmalik stated that the result of the sacrifices, patience and steadfastness of our people are victory and strength while the aggression today is more retreating and weak.

The Ansarullah’s president of the Supreme Political Council in the Yemeni capital, Sana’a, Mahdi al-Mashat, made the announcement on Friday.

“We are announcing that we will stop targeting Saudi territories with drones and ballistic missiles and all kinds of targeting, and we will wait for the favor to be returned with a similar or even better one by (Saudi Arabia) announcing a halt to all sorts of air strikes against Yemeni territories,” Yemen’s Arabic-language al-Masirah television network quoted him as saying.

Head of the National Delegation, Mohamed Abdulsalam, confirmed that September 21st is the day of the fall of foreign intervention and the fall of the rule of US and Saudi Arabia and other embassies that controlled the country in everything in state institutions.

He said on Saturday that “September 21st is the day the Yemeni people took their dignity and sovereignty from the wolves’ teeth.”

The Yemeni people today celebrate the fifth anniversary of the September 21st Revolution, the day Yemen is liberated from guardianship and the overthrow of a corrupt and pawned regime.

In September 2014, the Ansarullah forces took state matters in their hands in Sana’a amid the absence of an efficient government there.

Before gaining control of the capital, the Houthis had set a deadline for the political parties to put aside differences and fill the power vacuum. However, the deadline was missed without any change in the country’s political scene.

September 21st represents the starting point for Yemenis either to stay subject to contemporary slavery or to achieve freedom and independence through resistance against tyrants.

US will kill more Yemenis: Trump