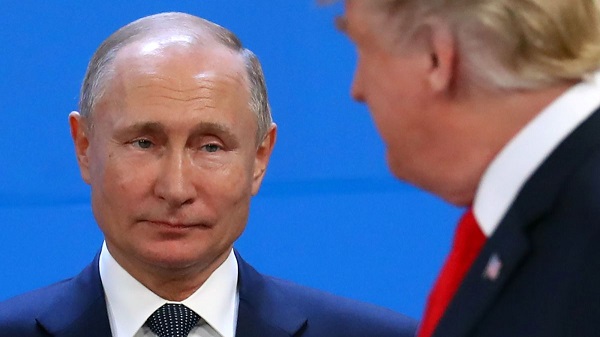 Putin in Saudi Arabia amid US Regional Influence Downswing

Russian President Vladimir Putin arrived on Monday in Saudi Arabia amid signs the US is losing its position in the West Asia region.

The visit to the Arab kingdom comes for the first time in over a decade amid fast-moving regional developments.

The visit is part of Putin’s regional tour, which would take him to the United Arab Emirates on Tuesday, to discuss topics of common interests with the leaders of the two Gulf countries.

Earlier in the day, Saudi State Minister for Foreign Affairs Adel al-Jubeir described the Russian leader’s visit to the oil-rich monarchy as “historic,” noting the visit will witness the signing of various agreements between the two countries.

The visit comes while Washington, and Trump in particular, is losing its influence as a superpower in the region and mainly among Arab allies who see it a must to diversify their allies and make new friends.

The bilateral business exchange boost is expected to be high on the agenda of the president with the Saudi leaders.

The two sides will also discuss a string of cases including the regional tensions, the Syrian crisis and also the Saudi will to procure Russian arms including the state-of-the-art S-400 Russian missile defense that has become a point of focus of a number of regional buyers.

What does the visit mean at the present time?

The visit to the oil-wealthy Arab kingdom means a lot to Russia and signals that the US is no longer the single player in the West Asia setting. Russia over the past few years showed every possible sign of being a new heavyweight in the region.

It opened its influence gain process by sending forces to Syria, where it backed, along with Iran, its ally President Bashar al-Assad. Its gains continued as it announced the defeat of ISIS in Syria along with the allies in 2017.

Its ongoing influence gain developed an appetite among the Arab states to engage in friendship with it. Russia’s Syria campaign distanced Moscow from its post-Soviet stagnation and introduced it to the club of clout holders in the region and even the world.

Saudi Arabia, among others, engaged in coordination with Russia in oil markets. Since last year, the two took almost all of their oil production steps in close coordination. The Saudis also expressed their hope to get S-400 missile defense system. They talked to the Russian about the long-range interceptors. Last month attack by Yemen with drones and missiles on Saudi oil giant Aramco’s oil facilities in response to the regular bombardment of Yemeni cities even added to the urgency of the missile defense procurement amid US-built systems’ failure.

The visit comes while Trump is pressuring the Arab allies, and mainly Saudi Arabia, to pay the costs of the American presence in the region. Yesterday, the US said it will deploy 3,000 forces to Saudi Arabia and missile defenses and warplanes and Riyadh will pay for the deployment.

But this deployment may not look serious to the allies. Trump repeatedly says it does not want a presence in the region, a comment received by the Arab rulers as a sign Washington is no longer a reliable ally but simply is an extorter.

They have enough reasons to justify this notion. On Wednesday, Turkey launched an attack on the Syrian Kurds. President Trump, a day before the operation, said he removed his forces from the Kurdish-controlled regions, giving the Washington-allied Kurdish groups a feeling of betrayal.

A feeling of potential betrayal is growing big among the Arab sides. Russia may be an alternative and a remedy to such a sense. Moscow sealed a deal with the Kurds who sought Syrian protection against the Turkish offensive.

Moscow, amid regional conflicts, has become a magnet for help seekers and those humiliated and abandoned by the US. Here Saudi Arabia and the Kurds make a big example. Moscow is the ally of hard times and the alliance with Syria and helping it to win a vicious war against terrorism bears witness to this in the mind of the Saudi rulers. Saudi Arabia finds this attractive while the US behaves as if the kingdom is a burden.

This over time will leave the Americans devoid of real partners while Russia attracts US Arab allies one after another.