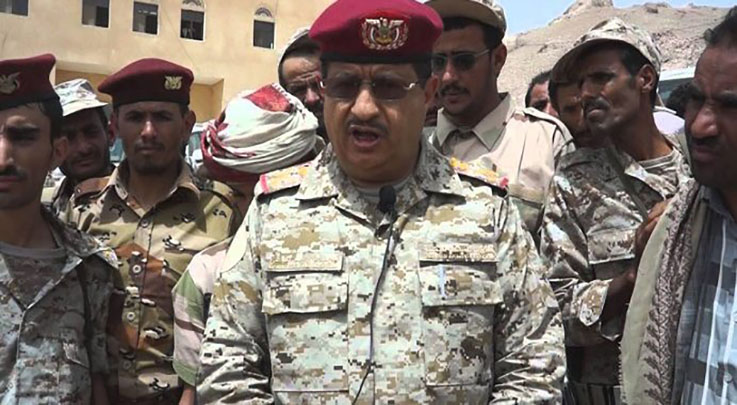 Hadi’s government, pro-aggression government, on Tuesday accused the UAE of being behind the attack, that targeted military leaders in Marib province on a meeting headed by Defense Minister Mohammed Ali Al-Maqdashi at the Joint Operations Headquarters, YPA reporeted.

“An Emirati drone targeted a military leaders’ meeting at the Joint Operations Headquarters,” Yahya Abu Hatem, an adviser to the Minister of Defense of the pro- aggression government said . He did not say whether the attack was before the explosion inside the meeting headed by Maqdashi, or after.

Abu Hatem linked the attack with the intensified campaign by UAE-backed Southern Transitional Council’s supporters against Maqdashi during the past days.

Mohamed al-Bukhiti warned that the UAE will not be targeted if it escalates its attacks, noting that it won’t bear the attacks.

“The targets banks are ready to be hit in UAE and Saudi depths, but now the decision is to stop the shelling,” al-Bukhiti said in a satellite interview with Al-Mayadeen.

Al-Bukhiti warned in the interview that “any escalation by the aggression countries will be responded to significantly.”  He added: “We warned the UAE against escalation because the depth of the UAE will be targeted and it is very vulnerable.”

The coalition has been striking Yemen since March 2015 to restore power to Mansour Hadi, a close ally of Riyadh. The Saudi-led aggression has so far killed and wounded at least 600,000 Yemenis, including hundreds of women and children.

What happens to main roads and streets in Yemen’s Socotra!