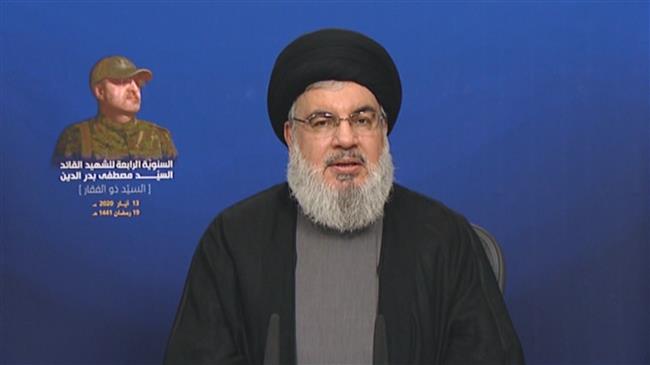 US Rep. Ilhan Omar (D-MN) (L) talks with Speaker of the House Nancy Pelosi (D-CA) during a rally with fellow Democrats before voting on H.R. 1, or the People Act, on the East Steps of the US Capitol on March 08, 2019 in Washington, DC.

The Secretary General of the Lebanese Hezbollah resistance movement, Sayyed Hassan Nasrallah, delivers a televised speech broadcast live from Beirut, Lebanon, on May 13, 2020.

Israeli authorities believe there is an existential threat to the Tel Aviv regime from Syria, particularly in light of the presence of fighters from Hezbollah and Iranian military advisors there, the Secretary General of Lebanon’s resistance movement says.

“Israel sees Syria as a danger and the country plays a great role in the threat perception of Israeli officials. The reason behind the war in Syria had nothing to do with the incumbent government in Damascus, but rather it was because the United States could not exert dominance there,” Sayyed Hassan Nasrallah said in a televised speech broadcast from the Lebanese capital city of Beirut on Wednesday evening.

Syria, having refused to bow down to US hegemony, lies in the heart of the Middle East region, he added.

“We knew that Hezbollah’s involvement in Syria’s war could have dire repercussions. Nevertheless, we believed that we were obliged to defend Syria and Palestine in the face of the US scheme,” Nasrallah said.

He then praised senior Hezbollah commander Mustafa Badreddine, who was killed in an attack in Syria four years ago, for his high morale, stating that he was fighting shoulder to shoulder in Syria with the late commander of Iran’s Quds Force Lieutenant General Qassem Soleimani, who was assassinated by a US terrorist strike near Baghdad International Airport on January 3.