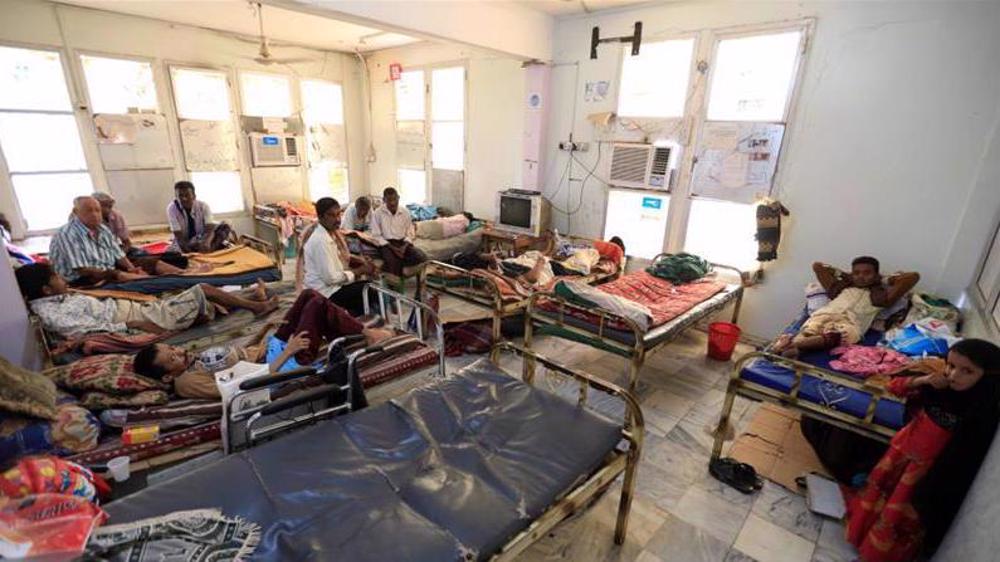 The file photo shows patients at a hospital in Yemen’s Red Sea port city of Hudaydah. (By Reuters)

The United Nations warns that urgent funding is needed to contain the novel coronavirus outbreak in Yemen, where the healthcare system has collapsed as a result of the Saudi-led coalition’s devastating campaign.

Many of the aid agencies operating in Yemen say the country is “really on the brink now,” Jens Laerke, spokesman for the UN Office for the Coordination of Humanitarian Affairs (OCHA), told a Friday briefing in Geneva.

“The situation is extremely alarming, they are talking about that the health system has in effect collapsed,” he said, quoting the aid agencies working in the war-torn state.

Laerke went on to say that aid workers have to turn people away because they say they do not have enough medical oxygen or sufficient supplies of personal protective equipment.

His comments came shortly after Doctors Without Borders, also known by its French acronym as MSF, said its main COVID-19 treatment center in southern Yemen has recorded at least 68 deaths in just two weeks.

“What we are seeing in our treatment center is just the tip of the iceberg in terms of the number of people infected and dying in (Aden),” MSF’s operations manager for Yemen Caroline Seguin said Thursday.

The COVID-19 disease has further deteriorated the humanitarian situation in Yemen, where 80 percent of the population are reliant on international aid for survival.

Early this week, the UN’s Food and Agriculture Organization (FAO) warned that Yemen’s health system was already under heavy stress and would now be overwhelmed “if COVID-19 continues to spread.”

The so-called regime led by Yemen’s former President Abd Rabbuh Mansur Hadi in Aden has since April 10 announced 180 infections and 30 deaths from the coronavirus.

But the MSF said Thursday that its center in Aden had admitted 173 patients from April 30 to May 17, at least 68 of whom had lost their lives, suggesting “a wider catastrophe unfolding in the city.”

Since March 2015, Yemen has been heavily invaded by a military coalition led by Saudi Arabia, trying to restore power to Hadi.