More Protests Sweep Washington, US Army sends Hundreds of its Troops to Quell Them 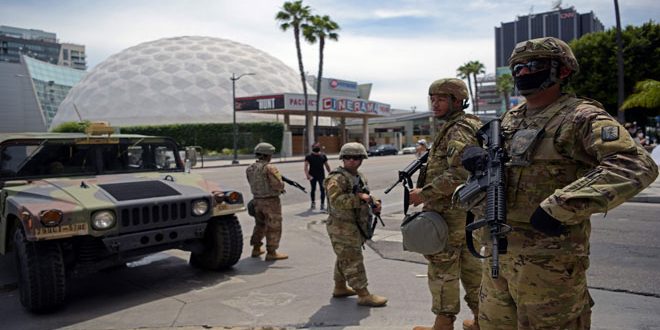 Washington, Undeterred by the curfew, tens of thousands of streamed back into the streets in major American cities today for the eighth consecutive day of escalating protests in an expression of anger over the killing of George Floyd, an African American citizen, at the hands of the police during his arrest.

According to Reuters, mass demonstrations took place in Los Angeles, Philadelphia, Atlanta and New York, as well as in Washington DC, near the park from which the protesters were evacuated yesterday to clear the way for President Donald Trump to walk from the White House to a nearby church to take a photo.

Protesters kneeled outside the Capitol building, chanting “Silence is violence” and “no justice…no peace” and police officers suppressed them and used violence with them before the government imposed the curfew.

The crowd remained in Lafayette Park even after the nightfall despite the curfew and Trump’s pledges to address what he described as “bandits” and “thugs” using the National Guard and even the army when necessary, in defiance of all calls made by mayors, strict curfews and other measures aimed at to stop the protests.

In New York, after the curfew began, thousands of protesters marched from the Barclays Center toward the Brooklyn Bridge, while police helicopters hovered over them.

Meanwhile, hundreds of protesters filled Hollywood street in Los Angeles, and others gathered in front of the city’s police headquarters.

For its part, and in an attempt to pressure and intimidate protesters, the US Department of Defense moved about 1,600 army troops into the Washington D.C. because of the protests which have been sweeping the country.

EU Says US Cannot Allow Russia Back in G7

US Anti-racism Protests Undermine its Claim to be a Model Democracy: Pakistani Analyst