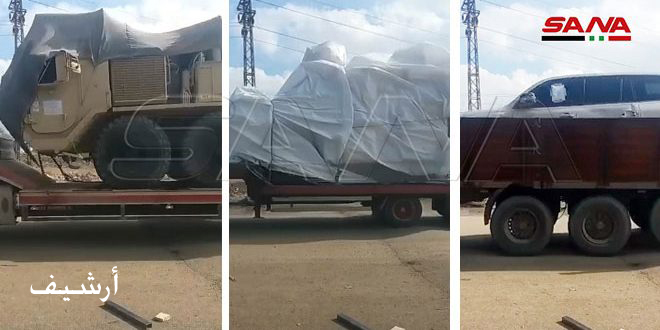 US occupation forces mobilized military and logistic reinforcements coming from Iraq through one of the illegal crossings into the Syrian territories in a new violation of the international law and norms.

Civil sources in al-Yaroubia area in Hasaka countryside told SANA reporter that the US occupation forces brought across al-Walid illegal crossing 30 vehicles to Syria coming from Iraq, which include trucks and military vehicles and closed refrigerator cars.

The sources added that the convoy headed to Hasaka city through the petroleum Road-Tal Hamis for enhancing the illegitimate presence of the US forces, particularly that the US occupation forces has established a helipad for the military hovercraft on the outskirts of Ghweiran neighborhood in the city, in addition to seizing a large number governmental buildings through Qasad groups.

A convoy of 30 tanks and carriers are loaded with fuel looted by the US occupation forces from fields they occupy in several areas in Syrian al-Jazeera, accompanied by military Hammer vehicles, left the Syrian territories towards Iraq through the illegal Semalka crossing in Al-Malikiyah city in the northeast of Hasaka.