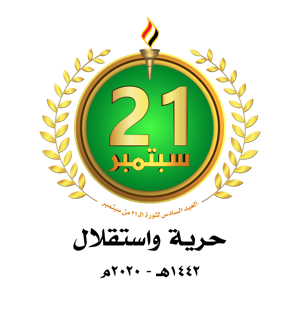 Today, Yemen marks its seventh year of the 21st of September revolution, which came as an urgent necessity for liberation, independence.

Perhaps the importance of celebrating the sixth anniversary of the September 21 revolution lies in the fact that it came in a pivotal history in the life of the Yemeni people, who finally have spoken after decades of dependency and corruption, which was a waste of many opportunities for building the state, achieving security and building the economy.

The September 21 revolution represented a starting point to stop the dangerous plots against which Yemen was exposed to after its political decision-making was being controlled by enemies of Yemen.

The revolution represented an important turning point in Yemen’s history, which ended corruption, foreign interventions regarding critical decisions of Yemen, and the evil intentions of many outsiders.

The importance of this revolution is that it moved the Yemeni people from a situation in which they were oppressed by its enemies, to a situation that made Yemen stong and an effective force in the region and the world.

Moreover, the September 21 revolution gave the true concept of true partnership, and it triumphed through responsible and effective actions that were taken by all the Yemeni people, despite the American and Saudi conspiracy and the threats issued by the Security Council. However, the people of Yemen were able to get out of imprisonment and dependence.

In this regard, the leader of the revolution, Sayyed Abdul-Malik Badreddin al-Houthi, says in one of his speeches, “One of the first, most important and greatest achievements of the revolution is the liberation of the Yemeni people from foreign tutelage and the restoration of their right to own independence, sovereignty and freedom.”

He pointed out that the main goal of colonial powers and aggressive countries and their regional paid mercenaries with Yemen is to take away its independence and sovereignty and control the country with satisfies its interests.

The leader of the revolution emphasized that what made this revolution great and pure is the participation of the people from various groups and components of the Yemeni people.

He pointed out that the sacrifice, patience and steadfastness of the Yemeni people resulted in victory, strength, and cohesion in facing challenges, most notably confronting the forces of the Saudi-led aggression and its mercenaries.

While the head of the Supreme Political Council, Field Marshal Mahdi Al-Mashat, says in one of his speeches that “the September 21 revolution represented what best suits Yemen, even if the price was high, the peoples’ choice was made, which wanted to be liberated from weakness and dependence.”

He pointed out that the September 21 revolution was peaceful, and it is considered to be the first revolution in history to settle for talks with its opponents, and did not erect the gallows.

President Al-Mashat clarified that the September 21 revolution’s purpose is to build a new kind of living that is filled with tolerance and coexistence and to establish the values of joint work to build a new Yemen free of corruption, tyranny, injustice, terrorism, and external domination.

He also clarified that, because of the Saudi aggression on Yemen, the suffering of the Yemeni people has not ended, stressing that the people must continue to steadfast the aggression and support fronts with all possible means to truly seek peace.

The Saudi-led aggression (coalition) on Yemen, which has been going for nearly six years, has impacted Yemen majorly. The Saudi waged war on Yemen and its blockade, in addition to the continued detention of oil derivative ships by the Saudi-led aggressive coalition, is part of Yemen has suffered in the past year. However, this did not prevent the people of Yemen from celebrating the sixth anniversary of the September 21 revolution in conjunction with achieving many victories on various fronts, the last of which was the defeat of Al Qaeda and ISIS from Al-Bayda governorate.

The celebration of this national occasion is a commemoration of a moral, political, military, and security victory, and a motive for confronting the Saudi aggression and an effective move to thwart its plans to try to return Yemen to dependency, tutelage, and control over its decision and enslavement.

The head of the National Salvation Government, Dr. Abdulaziz Saleh bin Habtoor considered what the country is currently going through is totally considered exceptional in the light of the aggression and siege it is facing.

The Leader of Yemen’s Ansarullah : Abdulmalik Al-Houthi emphasizes on independence is the greatest goals of the September 21 Revolution.