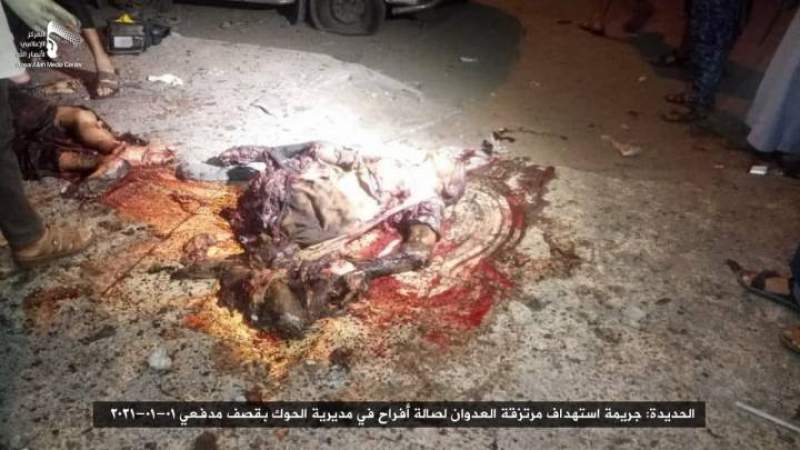 Three Killed, Many Wounded, After a Saudi Shelling on a Wedding Hall in Hodeidah (Preliminary Toll)

A number of citizens were killed and wounded, on Friday evening, as a result of the artillery shelling of the mercenaries of the aggressive Saudi-led coalition.

The initial toll indicates that three civilians were killed and a number of others were wounded as a result of the mercenaries shelling on a wedding hall in Airport Street within al-Haook district, Al-Hodeidah city, a source reported.

The source added that the initial death toll of the crime is 3 killed civilians and 7 wounded.

The member of the Supreme Political Council, Mohammed Ali Al-Houthi, condemned the crime committed by the mercenaries in Hodeidah, considering the crime to be deliberate terrorism.

Al-Houthi called for an urgent international investigation into the crime that targeted the wedding hall in Al-Hodeidah Governorate and all the crimes of the US-backed Saudi-led aggressive coalition in Yemen.

Moreover, the Ministry of Health condemned the crime and called on international organizations and Human Rights Organizations to put pressure on the countries participating in the aggressive war in order to stop the continuation of these crimes.

It also called on the United Nations to intensify its efforts to stop these attacks immediately and to take the necessary measures to preserve the safety and security of civilians.

Al-Murtadha :Saudi Pilots Will not be Exchanged without Palestinian Prisoners

America’s Exit From The Region Is The Only Punishmentto The Martydom Of The Two Leaders, Soleimani , Al-Muhandis: Ansarollah Spokesman