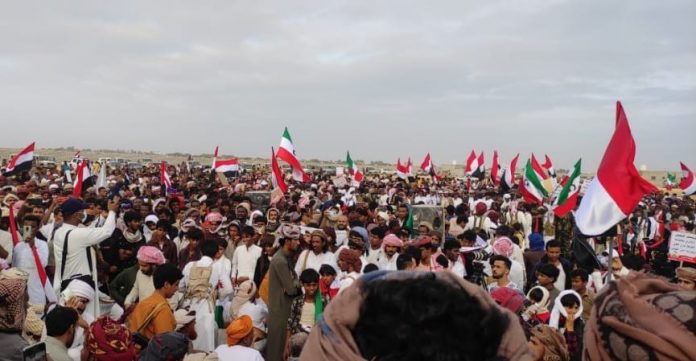 A mass demonstration was held in al-Ghaydah city, the capital of Mahrah province in eastern Yemen, calling for British and American occupation forces to quickly withdraw their troops from the province.

Protesters also called on the international community, the UN Security Council and all free people of the world to put pressure on the Saudi occupation to force it to withdraw its forces from all areas of the province.

The demonstration, presided by Sheikh Ali Salem al-Harizi and the leaders of the peaceful sit-in committee, as well as several tribal sheikhs of the province, on Friday confirmed the popular rejection of the occupation and the violation of Yemen’s national sovereignty, and demanded the speedy departure of foreign forces.

They also reiterated their refusal to turn the province into a barracks for foreign troops or an arena for a new cold war or open conflict between international and regional powers.

Protesters raised banners stating the willingness of the people of the province to defend and sacrifice for the homeland, in order to preserve their dignity and sovereignty.

A statement was issued during the protest, confirming that they would stand on the side of the sons of Socotra in the face of continued UAE occupation.

“With unrelenting determination, we stand bravely with our brothers in Socotra province, with whom we are connected by brotherhood, blood, lineage, religion and language,” the statement read.

It strongly condemned all the crimes of the UAE-Saudi occupation in the Socotra archipelago, while stressing their solidarity with the resistance there.