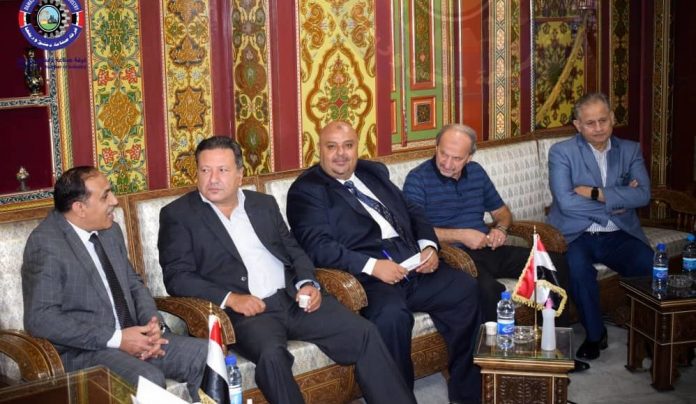 Yemeni ambassador meets with head of Damascus Chamber of Industry

This came during his meeting with the President of Damascus Chamber of Industry and Countryside Dr. Samer Al-Debs, and a number of the Chamber’s members.

The officials touched upon investment opportunities and facilitating trade exchange in coordination between the Chambers of Industry and Commerce in the two countries, and work to resume relevant understandings and protocols, taking into account changes and developments.

In the meeting, ambassador Sabri stressed that the siege, sanctions and economic war constitute a common pain between Yemen and Syria, explaining that the war on the two countries is American par excellence, in which the two countries made an epic of popular steadfastness in the face of aggression, siege and conspiracies.

Sabri pointed to the strict measures taken by the National Salvation Government in Sana’a, are successful in limiting the deterioration of the national currency and providing local alternatives for agricultural and food products and commodities.

“We look forward to benefiting from the Syrian experience in the industrial sector and the self-sufficiency that help Syria to stand firm and make the Syrian government independent by its political decision,” the Yemeni ambassador added.

For his part, the Syrian official indicated that the resistance axis was targeted economically, after the military war on it failed, calling on Yemeni businessmen to coordinate with Syrian businessmen and establish joint investments to advance the economic reality in the two countries.

Protest gatherings held in Hodeida to denounce continuation of blockade