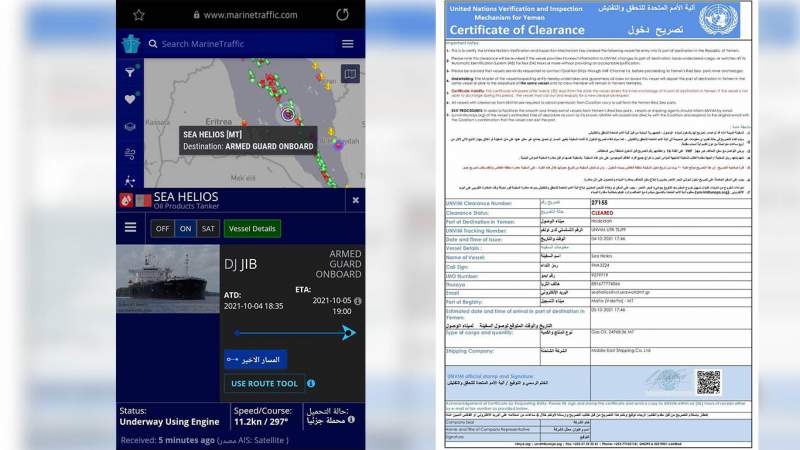 The coalition of the US-Saudi aggression has prevented a new fuel ship carrying 25,000 tons of diesel from reaching the port of Hodeidah,  the Executive Director of Yemen Petroleum Company (YPC) Ammar Al-Adrai said.

“The Saudi aggression pirated Sea Helios ship carrying 25,000 tons of diesel belonging to the private sector factories and prevented it from reaching the port of Hodeidah,” Al-Adrai stated in a post published on his official Twitter page on Wednesday.

Al-Adrai explained that the aggression’s seizure of the ship came despite obtaining an entry permit from the United Nations Verification and Inspection Mechanism (UNVIM). He stressed that the actions of pirates in the Red Sea continue in full view of the world.

On September 28, the coalition of aggression seized a Fos Power ship, carrying 27,000 tons of diesel and mazut belonging to private sector factories, and prevented it from reaching the port of Hodeidah.

On the 3rd of October, the YPC announced that the forces of the US-Saudi aggression are seizing three ships, including a ship carrying mazut and diesel.

It pointed out that sea piracy on ships took place for varying periods, amounting to more than nine months (284) days of sea piracy for the currently detained ships, despite the fact that all of these ships completed all examination and audit procedures through the mechanism of the UNVIM and obtained UN permits.

As part of its economic war, the US-Saudi aggression worked to drain about 97% of the Yemeni state’s resources, either by controlling them militarily such as oil and gas sources, freezing Yemeni foreign assets and transferring them to mercenaries and financing coalition operations, or imposing a siege on the vital port of Hodeidah and the most important port after Aden, which is still in the grip of Sana’a and out of control of the aggression.

A statement by the union committees of the YPC affirmed that the continuation of the US naval piracy on fuel ships, which has been held for more than eight months and a whole year for other ships, is a continuation of the killing of the Yemeni people.

It pointed out that what was released during the first half of this year of fuel represented only seven percent of the total need for diesel and five percent of the total need for gasoline. It pointed out that this has exacerbated the scale of the largest humanitarian catastrophe in the world, as described by United Nations officials who condone the crimes of the countries of aggression led by America and its blatant war on the Yemeni people.

In a blatant violation of the Sweden agreement, two Saudi raids target Hodeidah