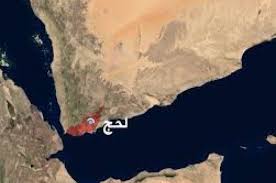 Massive Protest In Lahj Demanding The Departure of coalition

Radfan district in Lahj governorate witnessed,angry popular demonstrations, condemning the collapse of the currency and demanding the departure of the occupation forces.

The protesters demanded that the pro-coslition government pay the salaries of military and security personnel, restore stability to the local currency, increase the salaries of state employees and retirees, and reduce food and fuel prices.

The protesters also vowed to invade the city of Aden if their demands were not achieved and to take control of the mercenaries’ government headquarters, within only four days.

The protesters called for joining the Aden demonstrations and closing the Presidential Resident (Ma’ashiq Palace), the headquarters of the coalition forces and the Aden airport.

Al-Murtda : The New UN Envoy Failed to Arrange New Round of Negotiations

Tension Escalates in Aden After Police Officer Being Killed