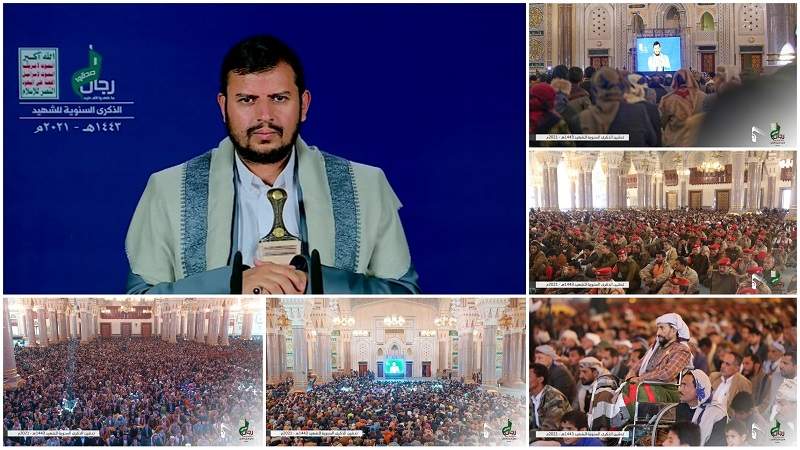 The Leader of the Revolution, Sayyed Abdul-Malik Badr Al-Din Al-Houthi, affirmed that the current events prove that it has become impossible for the Saudi-led aggression to ahcieve its goals, stressing that Yemenis will not accept any deals while the suffocating siege and aggression on Yemen remains, and their interference in the affairs of the country.

“The number of martyrs is large and includes many of families among the Yemeni people, while many are in a state of waiting and ready to sacrifice,” he added.

Tyrants want to enslave us so that we can act according to their interests:

He pointed out that the forces of evil and tyranny do not leave us to live free as Allah wants us.

Sayyed al-Houthi stressed that the tyrants want to occupy us and plunder our capabilities and enslave us in order to move according to their interests, pointing out that the problem of the enemies with us is that they seek to break our will by their tyranny and their aggression, killing and launching a comprehensive war, militarily, economically, media and culturally.

He pointed out that Muslims in all their countries are a nation that is targeted by enemies with military, security and economic conspiracies and the “soft war”, explaining: “The enemies of the nation want to rob our freedom, dignity and independence, and these are the most important parts of Islam.”

“There is no value for Islam in a person that is a slave to tyrants and humiliated in front of criminals,” stressing that “the value of Islam is for a person to live free, proud, and lofty, moving according to Allah’s instructions.

Today’s generation is free that refuses to be enslaved:

Moreover, he pointed out that the enemies know how the youth go to the fronts with diligence, patience and steadfastness, and how they take heroic positions on the field, pointing out that people in all countries are surprised by the steadfastness and sacrifice of the Yemeni soldeirs on the battlefield, even when they are barefoot.

The Leader of the Revolution also emphasized taking care of the families of the martyrs, adding: “We have the responsibility to take care of the poor families, and this is their right and our duty.”

We will not accept deals and bargains while the suffocating siege on Yemen remains:

With regard to the aggression and the continuous siege on Yemen, Sayyed Abdul-Malik stressed that today’s events testify that achieving the objectives of the aggression has become impossible.

“The whole world tells them that there is no interest in your aggression, and you have failed in it, and you will not reach your goals,” he said, adding “our continued defense and our freedom is a right position, a just cause, a correct, wise and legitimate position with all considerations.”

“Souls are removed from our bodies without being stripped of pride, dignity, morals, principles and values. This is the Yemeni people,” he pointed out, stressing that “the situation in which we neglect our dignity and accept crushing of freedom is not an acceptance of peace, but rather a surrender.”

He reiterated that “we accept peace and do not accept surrender, and to achieve this they have to stop their aggression, lift their siege and end their occupation,” emphasizing that the Yemeni people are not aggressive by saying: “We are not aggressive people.”

“We are in the seventh year and they continue their aggression and siege, and we are in the legitimate position in the Qur’an and in all international laws to confront the aggression,” he added.

At the conclusion of his speech, the Leader of the Revolution said: “We are proud of every sacrifice we make, and future generations will be proud of it, who will enjoy the outcomes of this steadfastness and generosity with independence and freedom,” calling for attention to the usual activities on the occasion of the martyr’s memory, and to continue supporting the fronts with men and convoys.