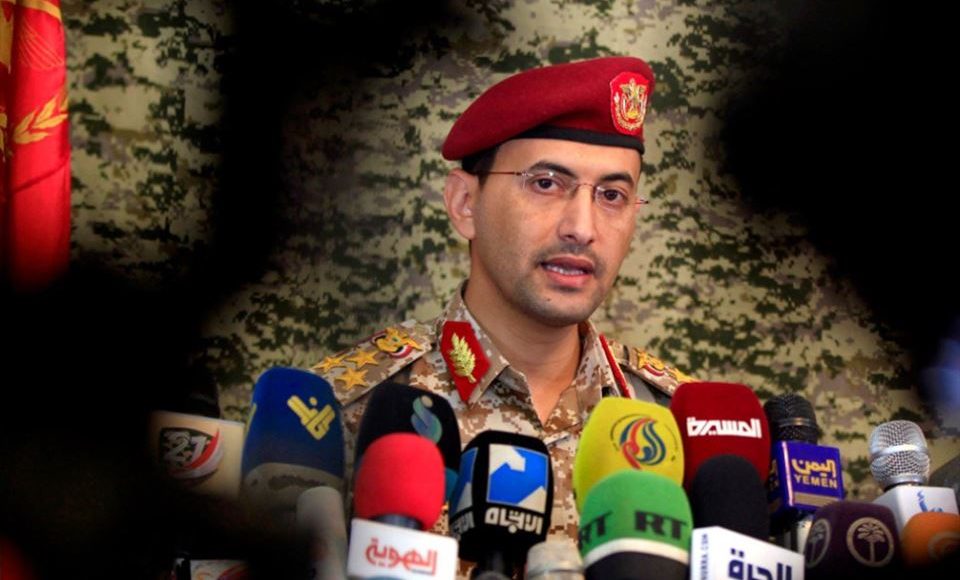 He pointed out that the armed forces have strengthened their field military position within a comprehensive strategy based on several tracks, foremost of which is the liberation of more areas and the defeat of the aggressors and their mercenaries. The year 2020 and 2021, the spokesman clarified, have witnessed a transition to qualitative offensive operations that led to the liberation of large areas of the land and inflecting Several losses on the Saudi side.

He stressed that the Yemeni military clearly confirmed its great ability to confront the US-Saudi coalition of aggression, despite the big difference in material and armament capabilities.

In the press conference, Brigadier General Saree confirmed that the aggression continued during the year 2021 in launching raids on the country and also kept the siege going, in addition to its attempt, through its various military formations, to impose its control and occupation of several areas of Yemen’s land.

Moreover, he stressed that the coalition of aggression launched during the year (2021) 7100 air raids targeting several areas, which led to the occurrence of killed and wounded. In addition, the raids also targeted the infrastructure and property of citizens, explaining that the bulk of these raids targeted different areas of Marib Governorate.

Brigadier-General Saree confirmed that the armed forces responded to the escalation of the military aggression by carrying out 194 qualitative offensive operations during the year 2021, and also carried out 382 raid operations.

Brigadier General Saree indicated that the Yemeni armed forces carried out, during 2021, a number of qualitative operations.

He stressed that the operations of the army and the popular committees led to the liberation of large areas that are estimated to be 12,000 kilometers, and these areas are in the governorates of Marib, Al-Jawf, Al-Bayda, Al-Hudaydah and Shabwa.

Brigadier General Saree revealed the achievements of the ground forces units, which played a major role in the battle for freedom and independence during the year 2021, as the various units carried out a large number of operations within their daily operational tasks and in various axes and regions.

He explained that the operations of the ground forces amounted to 40,126 operations, detailed as follows:

The engineering unit’s operations during 2021 amounted to 5010 operations, including 3,375 targeting enemy soldiers, 1390 targeting all kinds of vehicles, and 245 targeting fortifications and barracks.

He added that the artillery unit’s total operations amounted to 21,925 operations targeting enemy fortifications, gatherings and mechanisms, including 283 joint operations with the Air Force, and 2,298 operations in which the unit used Zelzal-1 missiles.

Brigadier General Saree pointed out that these operations led to the killing and wounding of more than 1,527 enemy forces and the destruction of 276 vehicles, armored vehicles, a military bulldozer, a tank, 32 different medium-weapons, cannons, 3 thermal cameras, 5 depots and 3 communications networks.

With regard to the achievements of the sniper unit, Brigadier General Saree explained that during the year 2021, the sniper unit carried out 13,191 operations.

Brigadier General Saree indicated that 1,025 repelling and forcing warplanes to leave operations, and 22 downed operations, including 6 Chinese-made CH4 planes belonging to the Saudi Air Force, 12 Saudi Scan Eagle planes, and two Wing Loong 2 planes, in addition to MQ9 US-made plane (these planes are used by the US Army itself).

Brigadier Saree added that the air defense operations led to the downing of 1 Turkish-made Karial plane belonging to Saudi Arabia and two American RQ20 planes belonging to the Saudi enemy, while the number of small reconnaissance UAVs downed reached 64 planes.

Brigadier General Saree affirmed that the Yemeni missile force is proceeding, with Allah’s help, to develop its capabilities, in a way that contributes to strengthening its role in the battle for freedom and independence.

He reiterated that the air force was able to carry out, in a short period of time, several achievements at the level of the battle for freedom and independence.

With regard to enemy losses, Brigadier General Saree explained that the competent authorities in the armed forces were able to document the enemy’s human losses during the year 2021, which led to the killing and wounding of 394 Saudi soldiers and officers, including 160 dead and 234 wounded. Also, 745 Sudanese mercenaries were killed or wounded, including 233 dead and the rest wounded.

“As the Sudanese authorities are involving a part of their army in the aggression against Yemen, we find the Saudis are pushing those forces to the front lines until they receive strikes and losses in their ranks,” Brigadier-General Saree said.

Saree explained that the losses among the local mercenaries amounted to more than 24,000, between wounded and dead, as the number of dead reached 9,892 and 14,968 wounded.

The spokesman of the army noted that the armed forces, as they announce these statistics of the enemy’s losses, express their deep regret that most of the dead and injured are Yemenis who have accepted for themselves to be agents, traitors and mercenaries with the enemies of Yemen.

The armed forces renewed the call for everyone who fights among the enemy’s ranks or works with them to return and do what’s right, before it is too late, as he put it. The spokesman noted that the enemy is throwing its Yemeni mercenaries into a losing battle against their country and people and uses its Yemeni mercenaries to achieve its goals in occupying Yemen, tearing it apart and plundering its wealth.

Brigadier-General Saree added in his press conference that the Yemeni forces succeeded in destroying and damaging 1,749 vehicles, armored vehicles, and personnel carriers, 253 medium weapons, and burning 39 warehouses, in addition to the losses sustained by the Saudi enemy as a result of the missile force and the drone air force’s operations, which targeted military and vital centers and facilities.

He pointed out that the armed forces were able to confront the coalition of aggression and move forward in the process of qualitative construction through continuous training to supply the fronts with fighters, despite the conditions of aggression and siege.

Brigadier-General Saree pointed out that the military media had an important role in documenting and transmitting the live image from the fields of jihad, so the image was the best expression of the truth of the Yemeni achievement of heroism, sacrifice, bravery and courage.

The armed forces saluted the role of all official and popular institutions and bodies contributing to the battle for freedom and independence. saluting the tribes loyal to their principles that adhere to their customs rejecting the occupation and supporting the armed forces in this fateful battle.

Brigadier General Saree affirmed that the armed forces possess today the capabilities, competencies and experiences that make them capable, with Allah’s help, to face various challenges. He added that steadfastness in the face of the coalition of aggression has given the Yemeni military a unique experience that will be added to the military and war history in resisting the invaders, defending the country and the people.

The starting of a new stage

The Armed Forces spokesman, Brigadier General Yahya Saree, affirmed that the armed forces have determined to inaugurate a new phase of steadfastness and confrontation, benefiting from the experience of previous years and from the great popular rally in support of the battle for freedom and independence.

“With all faith and confidence in Allah Almighty, the armed forces are moving forward with their heroic fighters towards imposing new levels that the enemy does not expect,” Brigadier-General Saree said.

Brigadier-General Saree sent several messages to the forces of aggression, saying, “These faithful and steadfast people have never been defeated by any force or undermined its will and determination. Rather, it has triumphed over all the invasion forces throughout history despite the difference in capabilities.

“If you have a long breath, ours’ is longer because we are defending ourselves, our people and our country. This land is our land. We live on it, and on it, we die, and the battles will end,” Saree said, adding: “Do not expect in Yemen anything but defeat, and do not expect from Yemen anything but disappointment and failure, for this people fought the invaders for decades, it did not break, did not retreat, and did not stop, absorb the lessons of your predecessors, mercenaries, traitors and agents,”