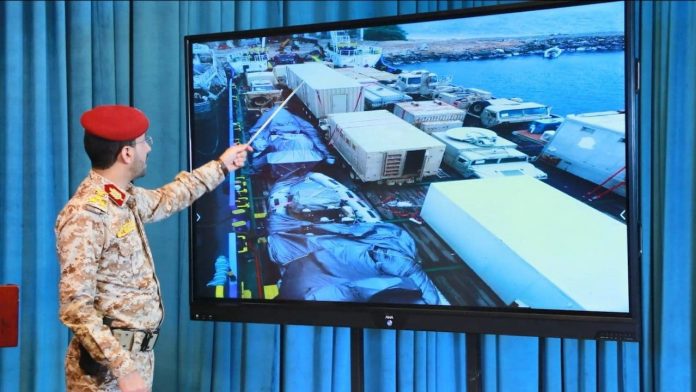 The Yemeni armed forces said on Monday that they seized an Emirati military cargo ship carrying military equipment for entering Yemeni waters without any license.

The armed forces indicated, in a statement, that the ship was carrying out hostile acts targeting the security and stability of the Yemeni people.

In the statement, the Yemeni army spokesman, Brigadier General Yahya Sare’e released the the full details of the operation.

For the first time, the Yemeni Navy forces succeeded in carrying out a qualitative military operation at off Red Sea through seizing an Emirati military cargo ship while engaging in hostile activities at sea, Brig. Gen. Sare’e explained.

He added, “The hostile ship carries military equipment, including mechanisms, devices, and other equipment used in the aggression against the Yemeni people,” he said.

The Emirati ship has been monitored for weeks by the naval forces, and it has carried out several hostile acts and engaged in hostile activities in Yemeni territorial waters, he clarified .

“Following a careful monitoring of the ship’s activity, directives were issued to seize it as a part of the legitimate defense of our country and people. The ship was transported to the port of Al-Salif in Hodeidah,” added .

The army spokesman added that the naval forces, within the framework of their defense tasks for the Yemeni territorial waters, were and still monitor all the hostile activities of the warships of the Saudi-led coalition.

The army spokesman reiterated the warning that the army forces have the appropriate options to respond to the coalition’s escalation.

On Other hand, The army spokesman further warned coalition forces of the consequences of any attempt to target the ship, which is loaded with weapons, as the crew of different nationalities is still on board.