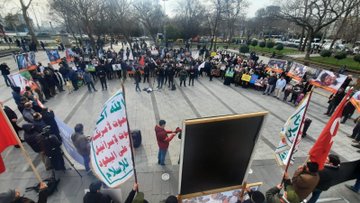 Mass Rally In Istanbul In Solidarity With Yemen

The Turkish Committee for Supporting the Yemeni People has organized a mass rally in Istanbul, in solidarity with the oppressed Yemenis and to condemn the crimes committed by the Coalition Saudi-Emirati on Sunday .

The protesters chanted slogans condemning the shedding of Yemeni blood, and the targeting of residential neighborhoods, telecommunication towers, and the temporary prison in Saada province.

They also raised banners calling for stopping the Attack and lifting the siege and carried pictures that showed part of the suffering of the Yemeni people and the crimes of the coalition against Yemenis.

The event came in conjunction with mass rallies and protests held in different cities of the world, condemning the recent escalation of Coalition Saudi-Emirate crimes and massacres against Yemeni civilians.

In the past few weeks, over one hundred Yemeni civilian have been killed and many others wounded in airstrikes launched by the Saudi-Emirati coalition in Saada, Sana’a and Hodeidah provinces.