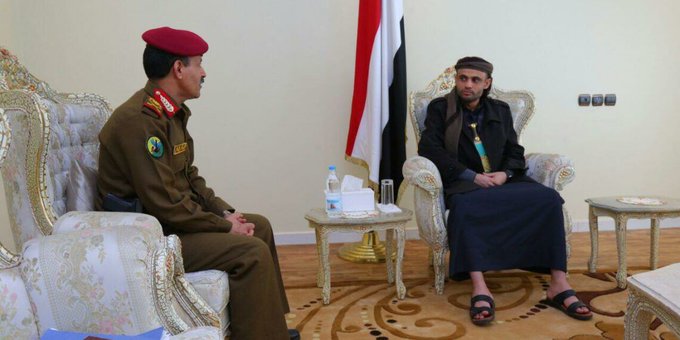 President al-Mashat discusses with the minister of defense latest developments

President of the Supreme Political Council, Mahdi al-Mashat, confirmed on Saturday his keenness for making the truce a success, opening Sana’a airport and Hodeidah port, and lifting the siege in order to ease the suffering of the Yemeni people.

This came during his meeting with Defence Minister, Major General Mohammed Nasser al-Atifi.

During the meeting, they discussed the level of commitment by the Saudi party to the humanitarian and military truce declared by the United Nations, and the efforts made by the relevant authorities in Sana’a in this regard.

President Mahdi al-Mashat reiterated the emphasis on cooperation and support for any sincere efforts that seek to achieve honourable peace for the Yemeni people, and preserve the security, stability and unity of Yemen.

The Minister of Defence for his part affirmed the commitment of the army and the Popular Committees to the truce despite the violations committed by the Saudi-led coalition forces and their repeated targeting of several sites.

landmine of mercenaries results in killing a civilian in Hodeidah

61 violations committed on the cease-fire agreement in Yemen