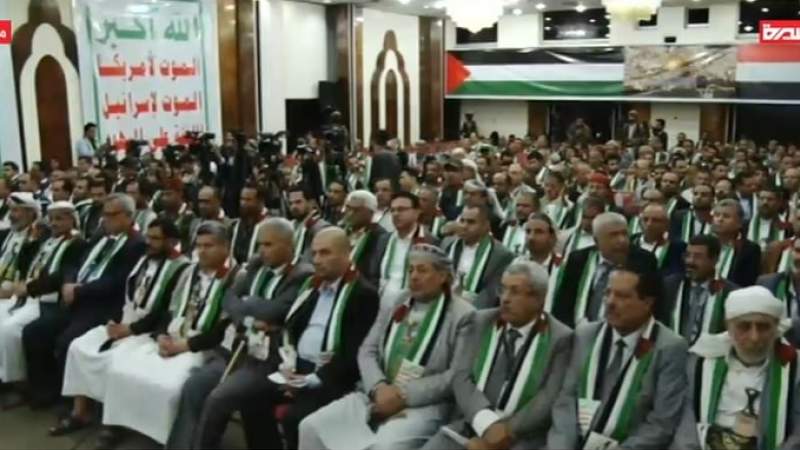 The conference (Palestine is the central issue of the nation) kicked off in the capital, Sanaa, today, Monday, under the auspices of the Chairman of the Supreme Political Council, Field Marshal Mahdi Al-Mashat, and the President of the National Salvation Government, Abdulaziz bin Habtoor.

The opening session of the conference, which will last for four days, was attended by the Mufti of Yemen, the scholar Shams Al-Din Sharaf Al-Din, the member of the Supreme Political Council Sultan Al-Sami, the head of the Shura Council, the head of the Supreme Judicial Council, the president and members of the National Salvation Government, representatives of the Yemeni components and political and social parties, and representatives of the resistance in Palestine.

The Minister of Scientific Education delivered a speech by the Supervisory Committee of the Palestine Conference, during which he thanked the leader of the revolution, Sayyed Abdul-Malik Badr Al-Din Al-Houthi and the head of the Supreme Political Council, who did not forget the wounds of Palestine and made it a priority for them, despite the aggression and siege, welcoming all attendees and participants in the conference “Palestine is the central issue of the nation”.

He stressed that the aggression that has been going on for more than 7 years has not distracted Yemenis from their main focus, that is Palestine, and standing by the side of the steadfast and the struggling Palestinian people.

He pointed out that Palestine is the land of peace, the route of the prophets, and the heart of the Arab homeland, which is still in a state of bond and clash with the occupiers for decades.

In another speech made by the Preparatory Committee for the Conference, Dr. Ali Sharaf El-Din, called on the Islamic nation to move seriously to confront the Israeli enemy, explaining that the Palestine Conference has important dimensions at the level of the conflict, and is the first of its kind in light of the current circumstances and changes at the level of the nation.

He pointed out that most of the Gulf regimes deviated from the Quranic culture and did not pay any importance to the divine warnings from the Jewish enemy, pointing out that this conference seeks to mobilize the nation, build awareness among its people, and strengthen the axis of resistance and jihad for the liberation of Palestine.

Sharaf El-Din stressed that the struggle with the enemy has become a civilized conflict that includes aspects of cultural, political, economic, media and military life.

He thanked everyone who supported this conference and the researchers participating in it, whose participation reached more than 60 working papers and research. He also thanked all the participants in this conference from different countries around the world.