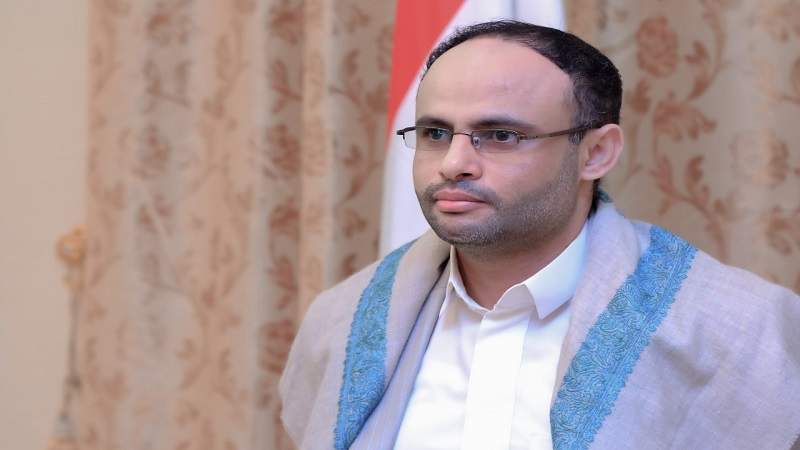 President Al-Mashat: Our support for Palestinian people is principled position

President of the Supreme Political Council, Mahdi Al-Mashat, on Monday affirmed that supporting the Palestinian people, and standing with all the free people of the nation, is a principled, humanitarian, political and religious position for the Yemeni people, and it cannot change.

“Despite the current circumstances, we look forward to having an active and practical role in the liberation of Palestine, and this was also confirmed by the leader of the revolution, Sayyid AbdulMalik Badr al-Din Al-Houthi, and was expressed by millions of Yemenis in various situations and fields,” President Al-Mashat said in an article in “Al-Mayadeen.

He stressed that Palestine is the central issue of the nation. “After 74 years of the Israeli occupation of Palestine, the occupying Israeli enemy is still trying in all ways and means to liquidate the Palestinian cause. In return, the free people of the nation faced all these attempts with fierceness and faith and trust in God Almighty.”

“Today, the Palestinian issue is still the central issue for all the sons of the Arab and Islamic nations and the free people of the world, around which all issues revolve, despite the wave of normalization undertaken by regimes that were and are still far from the positions of their peoples,” the President added.

He pointed out that, during all those years, the world witnessed the most heinous crimes against the Palestinian people by the Israeli enemy and with the complete and malicious sponsorship of the United States of America and its alien regimes.

On the other hand, all those years have proven that jihad, resistance and all forms of armed struggle are the only way to liberate Palestine and its holy sites, foremost of which is Al-Quds Al-Sharif.

President Al-Mashat indicated that the Republic of Yemen today, while holding the “Palestine is the central issue of the nation” conference, reaffirms the firmness of the Yemeni people’s stance towards the Palestinian cause and its standing by the Palestinian people.

Despite all the suffering of the Yemeni people for more than seven years of the brutal US-Saudi aggression and the suffocating siege, it was the leader, at the level of the Arab region and the world, in its massive rallies in various squares, in solidarity with the Palestinian people and their just cause, President Al-Mashat referred.

President Al-Mashat also called on the peoples of the Arab and Islamic nations to boycott American and Israeli goods and support the Palestinian resistance to liberate every inch of Palestine from the filth of the Zionists.

In his article, President Al-Mashat condemned all forms of normalization with the Israeli enemy, reminding all the normalizers that Palestine and their nation are more worthy of them and their enthusiasm than “Israel”.