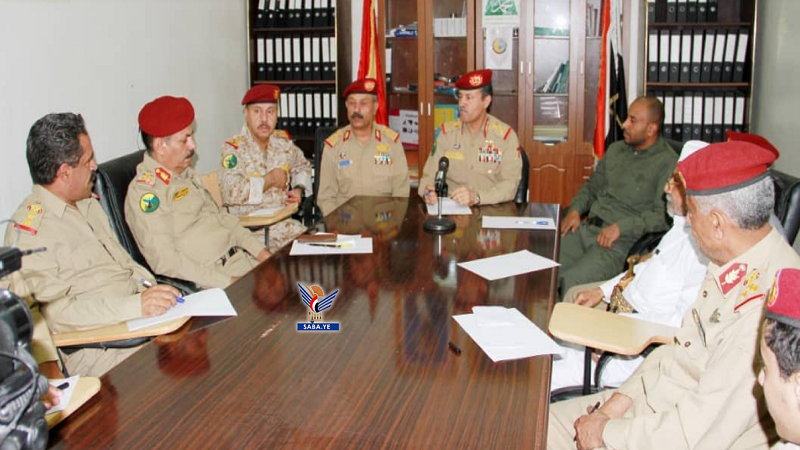 Minister of Defense Major General Mohammed al-Atifi on Monday affirmed that Sana’a is ready for a fair and just peace, as it is ready to confront the enemies and their conspiracies.

This came during his visit to the joint operations room to monitor violations of the aggression coalition.

The Minister of Defense indicated that the armed forces are committed to the truce despite the continuous violations by the aggression forces.

He continued, “We are aware of the extent of the violations committed by the aggression forces and those who have been fighting with them since the beginning of the truce, and they are in the hundreds, and we expect that from them, and it is not something strange or surprising to us.”

The Minister of Defense explained that if the aggression forces were sincere, they would open Sanaa International Airport for the travel of patients, and they would not have prevented ships loaded with oil derivatives from reaching the port of Hodeida, and both are purely humanitarian aspects.

“There is a conspiracy and an official agreement with the aggression coalition countries to hand over Yemen to the Zionist entity and those who stand behind them from the Western countries in return for some demands,” Maj. Gen. al-Atifi said.

The defense minister called on the free people of Yemen here and abroad not to participate in this conspiracy.

“What is happening is just a test for the Yemeni people and a screening of who will stand with Yemen and who will neglect the right of Yemen and the Yemenis,” he added.

He stated that “the aggression coalition countries are gathering Yemenis who are fighting with them and supporting them in various fields so that the war will continue.”

The Minister of Defense praised the great successes of the Military Intelligence Authority and its efforts that have yielded positive results on all levels.

President Al-Mashat: Our support for Palestinian people is principled position