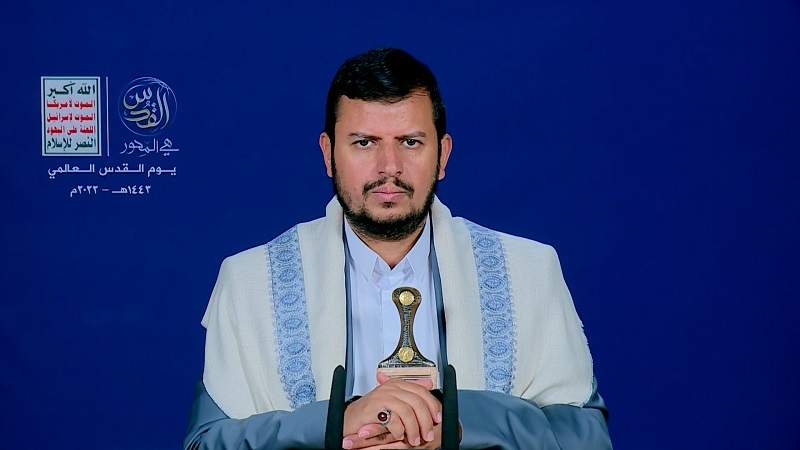 The leader of the revolution Sayyed Abdulmalik al-Houthi affirmed on Tuesday that the Yemeni people are firm in their clear, explicit, principled religious position in adhering to the right of the Palestinian people and the Islamic world to restore the holy sites, especially al-Aqsa Mosque.

The Leader of the Revolution said in a speech on the occasion of the International Quds Day Events, “The Yemeni people provide faith and wisdom, based on their Islamic principles and based on their faith identity, steadfast in their clear, explicit, principled religious position in adhering to the right of the Palestinian people and the Islamic world to restore the holy sites, especially the mosque al-Aqsa Mosque and the purification of the whole of Palestine from the evil of the Zionists, the Jews, and the lifting of oppression from the Palestinian people, who are part of the Islamic nation.”

Al-Houthi added the Yemeni people, along with the free people of the nation and the axis of resistance and Jihad will seek concerted efforts, raise the level of cooperation and coordination within the framework of this sacred goal, and advance this religious and humanitarian responsibility towards Palestine.

He went on to say, “In this context and on this important occasion, we reaffirm our earnest and sincere adoption of the equation announced by His Eminence, the Secretary-General of Hezbullah Sayyed Hassan Nasrallah, in which he declared that any existential threat to al-Quds means a regional war, and we will not hesitate to participate in everything we can with the free people of the nation and the people in the Palestine and the al-Mujahideen/fighters in Palestine as well as our brothers in the axis of resistance.

Al-Houthi said, “The International Quds Day, as it is an important occasion to remind the nation of its responsibility towards its sanctities and its children in Palestine and towards a country and part of the Islamic countries, and as it is an awakening for the nation and peoples to move seriously, consciously and comprehensively, to restore the right and support the oppressed Palestinian people.”

He added, “It is also an important occasion to unite the nation on this issue to adopt the correct, unified position, as such an issue is the clearest issues in which there is no ambiguity and the sons of the nation acknowledge even those who showed their deviation and announced it recently under the title of normalization, as it was preceded by the recognition and consensus of the nation on the oppression of the Palestinian people.”

He concluded his speech that the Zionist entity is witnessed by reality factors in the annihilation.