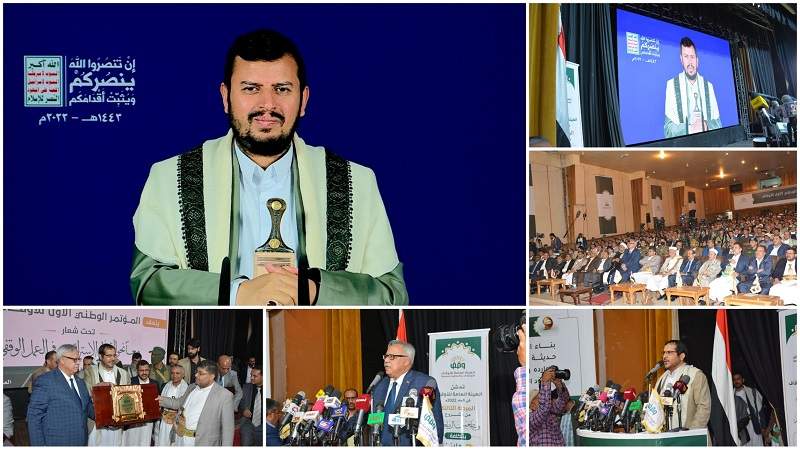 The leader of the revolution, Sayyed Abdulmalik al-Houthi, on Monday affirmed that Yemeni society is one of the societies that has provided endowments for centuries, which indicates the spirit of faith in this society.

In his speech at the First National Conference of Endowments, the Leader of the Revolution said  “There are many endowments over decades, generations and centuries of time, there is no gap, a generation comes with different orientations and spirituality.”

Al-Houthi pointed out that this conference comes in the context of the interest of Awqaf Authority and those in charge of it and their tireless quest to raise the level of performance and carry out their important duties and responsibilities.

He said, “This orientation is a faith, honest and positive orientation that represents a model for all brothers in institutions and sites, and that a person has an orientation and a will to take care of what helps him to  perform his responsibilities as he should.

The Leader of the Revolution pointed out that endowments, in fact, have a religious dimension and are related to the faith side, as they are one of the proximity with which the donors draw closer to God Almighty.

He added, “We hope that Allah Almighty will help us all in this generation to be a valid extension of the generations that have passed, from our fathers and from our people, who were the ones who received that great medal and the Great Medal of Honor. “Faith is Yemeni and wisdom is Yemeni.”

He said over the course of decades, the official side dealt completely negatively with regard to the Yemeni endowments and turned them into spoils that benefit some in the state without reaching its goals for which it stood for and in.

He said that the problems and negatives accumulated to a large extent in many endowments, and the leniency of the official side and the popular side as well, so problems and lack of awareness of the importance of endowments accumulated as a result of their non-fearing of Allah.

He wondered, “How many mosques have been wasted, idle, sabotaged, damaged and neglected, and the poor as well, who were an essential part of the directions to which the endowments’ purposes are directed, have been deprived of this right, many things from public interests and services, such as drinking water services that people need, and so this had a negative impact on many  from the sides.”

He pointed out that the more attention is paid to this issue, the more the authority will be able to fulfill its responsibilities backed by everyone, as this is cooperation in righteousness and piety and among the responsibilities in which cooperation must be made, for everyone who has a relationship and a role through which he contributes to the establishment of this right, because the General Authority for Endowments has  ambitious plans to develop the endowment and make better use of it for its specific purposes and destinations in accordance with the legal obligations.

The Leader of the Revolution affirmed that there are great opportunities now, despite the complexities and the accumulation of problems, with the presence of the Authority and those in charge of it who are oriented with great interest and a sense of faith and a sense of responsibility  and an awareness of the value and importance of this aspect and its positive impact on the reality of life and the religious importance it represents.

He explained that there is a real opportunity that needs support, and that the authority is keen to have a clear and integrated vision through which it determines its performance by taking advantage of the means of the age and all the techniques and means that help at the administrative, developmental and economic levels, to achieve greater results in serving the poor, society and the mosques of Allah in various  Endowments related purposes.

The Leader of the Revolution expressed the hope that the authority would be supported by various state institutions, particularly the relevant authorities in the judiciary, the security side, government institutions or relevant ministries and each according to its relationship and role.

He pointed out that the authority has good plans, and it notes the nature of conditions and complexities, and seeks to address these problems in a gradual manner, and notes the side of the poor and the complexities that occur in many endowment issues, and seeks to address the issue in a wise manner, taking into account the affected community groups, in a way that combines the two things, between observing them on the one hand and maintaining Waqf on the other hand.

He stressed the importance of raising awareness in mosques and the media, in addition to dealing firmly and seriously with the reckless and abusers who are not interested in religious, charitable or humanitarian considerations, but rather the acquisition and control of endowment funds.

At the conclusion of his speech, the Leader of the Revolution wished the authority success and that the conference’s outcomes would be good and help improve the authority’s performance and define its tasks to benefit at all administrative, technical and economic levels and at all levels to help it better fulfill its responsibilities.