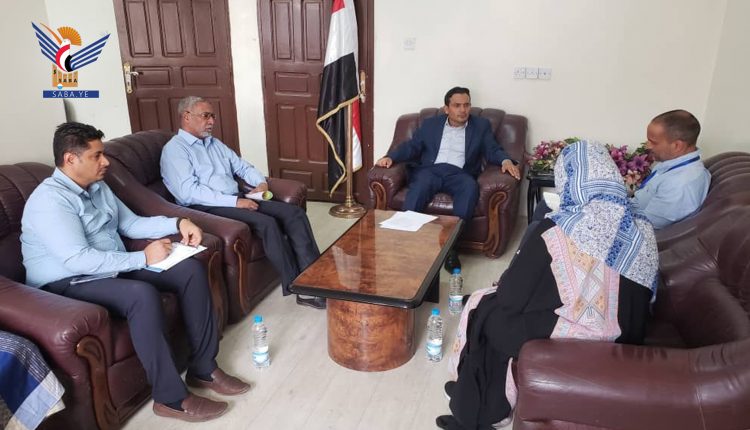 Acting Minister of Human Rights, Ali Al-Dailami, met on Monday with the Acting Resident Representative of the Office of the High Commissioner for Human Rights Safeer Al-Din Sayed.

In the meeting, al-Dailami and Sayed discussed cooperation and partnership between the Ministry and OHCHR in the field of human rights.

Al-Dailami reviewed humanitarian and human rights issues, particularly those related to violations of the right of the Yemeni people by the US-UAE Aggression Coalition, including cases of displaced persons because of the concentration of aggression airstrikes on the whereabouts of citizens, forcing them to move to safe places.

“It was the armed groups formed by the UAE under the leadership of Tariq Afash who committed the crime of rape of girls in Hays.” Expressing dismay at the lack of movement of humanitarian and human rights organizations towards these crimes, which generate other crimes harmful to society.

The Acting Minister for Human Rights called on OHCHR to play its part in this aspect and to visit and speak directly to victims.

He stressed the need for UNHCR to play its role in applying the Humanitarian Armistice Clauses fully without detracting, creating opportunities for dialogue and pressuring the coalition of aggression to halt violations and practices contrary to the declared United Nations Armistice clauses.

The Acting Minister of Human Rights handed over the representative of OHCHR, a revelation of the names of the martyrs who had died in Saudi-led aggression raids against the Sa’ada remand prison. The Ministry would provide possible facilities for UNHCR’s humanitarian and human rights work.

For his part, the representative of OHCHR stressed that OHCHR was working to monitor and report to the United Nations on crimes and violations against Yemenis in all regions.

OHCHR was seeking to establish a system of engagement with the Ministry of Human Rights in Sana ‘a to obtain and document all news on the humanitarian aspect of Yemen. valued the relevant Sana ‘a authorities’ support to UNHCR.

Women Crime Of Rape Of Six Girls In Hodeida(Hays)