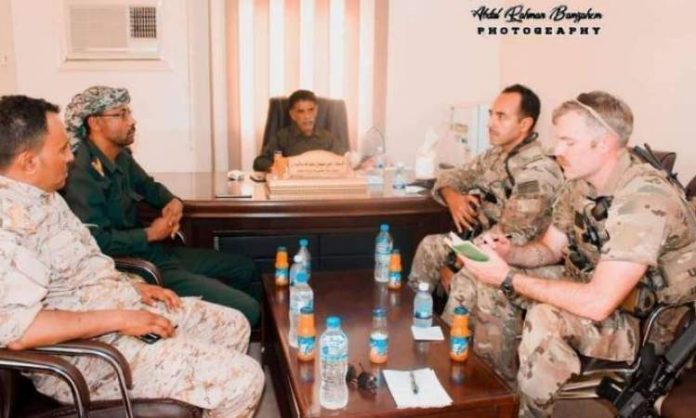 A new batch of USA forces arrived in Mukalla city, The capital of the oil-rich Hadhramaut province, in Eastern Yemen.

Informed Sources reported that a number of USA.intelligence officers arrived to Mukalla Airport on board a military plane, on an unknown mission to the Mukalla coast, during which they carried out a reconnaissance tour in the UAE-controlled Dhabba oil port, and Foah area, the most prominent stronghold of al-Qaeda, west of the Mukalla city.

The sources explained that the USA officers visited the areas of Al-Shihr and Brom, where the UAE-funded camp “Barshid” is located, without revealing the objectives of this sudden visit to those areas.

The US reconnaissance planes, “Drones”, flew over the airspace of Mukalla and the areas visited by the USA.intelligence delegation, according to the sources.

This came after the overthrow of the commander of the “Second Military Region”, Faraj Al-Bahsani, during the past hours, and the appointment of Fayez Mansour Al-Tamimi, who is known for his absolute loyalty to the UAE instead of him.

Some observers believe that the visit of the American officers to Mukalla comes amid USA plans to establish a military base near Al-Rayyan Airport, located on the Arabian Sea.

In last June, the USA ambassador to Yemen, accompanied by military experts, paid a visit to Hadhramaut province.

The UAE has closed Al-Rayyan Airport to civilian flights since the so-called al-Qaeda elements took control of the city of Mukalla, which were then expelled within hours in 2016, in a play described by political observers as “comical” aiming at imposing USA control over the oil sources in Hadhramaut, far from the confrontations with Sana’a government forces.

42 Violations Of Sweden Agreement in Hodeidah