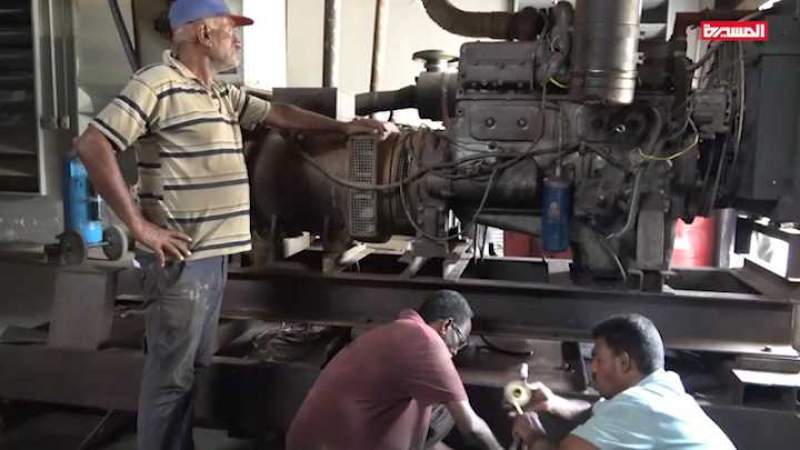 The Electricity Corporation in the Hodeidah region condemned the Saudi – Emirate coalition’s seizure of the “Golden Eagle” ship loaded with diesel for the electricity sector.

It considered preventing the ship from entering the port of Hodeidah despite obtaining a permit from the UN, a flagrant violation of the truce, and an arbitrary measure to double the suffering of the Yemeni people.
The statement helds the United Nations responsible for these practices, calling for pressure on the Saudi – Emirate to release the ship and allow it to enter the port of Hodeidah.

The statement denounced the silence of the international community regarding the continuous violations of truce by US-Saudi aggression, stressing that this silence will result in a multiplication of suffering of the Yemeni people.

A UN-brokered truce in Yemen first came into effect on 2 April, and for an initial two months. It was renewed for another two months in June.

However, in light of UN silence, the Saudi – Emirate was still obstructing flights to the Sana’a International Airport in Yemen’s capital and detaining fuel ships that were headed to the country. The fires of the Saudi – Emirate side did not subside along the fronts, on the borders and inside, including shelling, reconnaissance, development and crawl.

When the period specified for the military and humanitarian truce was nearing its end, the Saudi – Emirate seemed to be in a hurry to adopt the option of extending it for the third time to freeze the battle in Yemen and its economic repercussions away from global energy markets.

The forces of Saudi – Emirate coalition are pushing for an extension, not out of concern for peace, but rather out of fear that the escalation will add more complications to the international scene in addition to the crisis imposed by the Russian-Ukrainian war.

A truce, the positive effects of which have not been felt by the citizens over the past months, despite its broad headlines. Commercial flights to Cairo are still stumbling until today, and the navy of coalition continues to pursue fuel ships without respect for agreements or any regard for international laws and norms.

Double standards regarding the violations of the forces of coalition and its provocative practices is a double UN policy that has brought the crisis in Yemen to its current level of misery and deprivation that has affected everyone far from justice and the realization of the rights of the Yemeni people.

The truce has been renewed for an additional two months through 2 October, UN Special Envoy for Yemen, Hans Grundberg, announced on Tuesday.

The extension includes a commitment by the Saudi – Emirate attack and the Salvation Government to intensify negotiations to reach an expanded agreement as soon as possible.
The UN representative to Yemen Hans Grundberg confirmed that the extension of the truce in Yemen for two additional months “includes a commitment to provide fuel and its regular flow through the port of Hodeidah.”

Al-Ajri: Ansarullah Is Part Of Yemen’s History, No Force Can Cancel Them