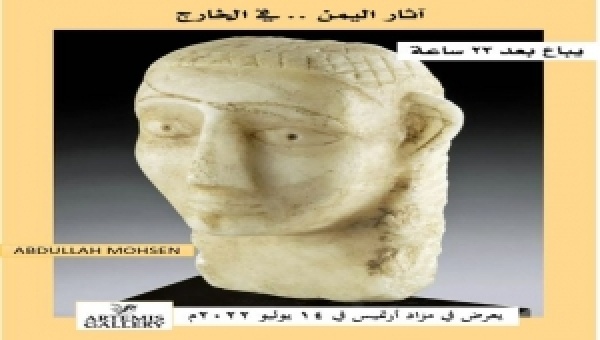 A Yemeni Archaeologist revealed that more than 60 Yemeni gold and antiquities that were smuggled from Yemen were sold at a public auction in London.

The researcher posted on his Facebook page that in the last minutes of the Time Line auction, corresponding to September 6, 2022 AD in London, A sculpted head statue of a man with a head covering was sold for a small price. The occupier called for the preservation of antiquities and legal intervention to prevent their sale in auctions or bear the costs of restoring them, especially with their low prices at the present time.
On other hand, He added that more than 60 Yemeni gold artifacts were sold for $745!
In the famous Mayfair Hotel in London, the Timeline Auction house held a large auction last Tuesday morning to sell 8857 antiquities from around the world, including a group of antiquities from ancient Yemen, which lasts for days.

On the first day, he confirmed, a lion necklace made of gold and jewelry was sold for $1,190, while a mixed group of gold beads of various types and sizes were sold for $745, equivalent to less than a two-night stay in the hotel where the auction was held.

Activists appealed to the British ambassador of the so called ” Legitimacy”, Yassin Saeed Noman, to intervene and stop selling Yemen’s antiquities at a low price, but without any action, reflecting his involvement in the operation.