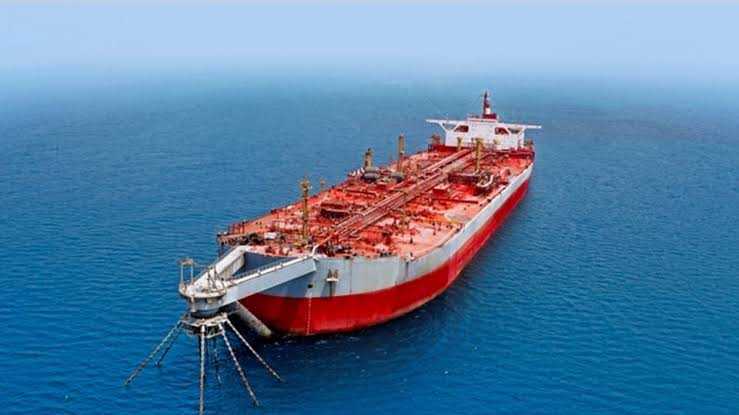 Recently, the US State Department warned, in an official statement on its website, that any new leakage from the floating ship Safer off the coast of Hodeidah would disrupt global shipping and other economic activities in the Red Sea region.
The worst what the United Nations issued, at a conference hosted by the Kingdom of the Netherlands in The Hague on the 11th of last May. It said that the reservoir may spill four times the amount of oil that leaked from the Exxon Valdez disaster in 1989 near Alaska, adding: “In the event of a leakage Oil from the Safer Floating Reservoir, the cost of the cleaning process alone would require $20 billion.”

The first cost 80 million dollars, and lasted four months. It includes the transfer of more than one million barrels of oil from the Safir floating tank to a new temporary vessel, while the second phase, which is longer in terms of time, includes replacing the existing tank.

This is not the first time that the Safer issue has suddenly emerged, and the imperatives of curbing its danger have been exaggerated, pretending to be a priority for the United Nations.

Since 2015, the US-Saudi aggression has worked hard to turn the ship into a political card, starting with the withdrawal of most of its crew members, with the exception of only seven, then imposing the ban on diesel fuel designated for the ship from reaching it in 2016 to stopping its main operating boilers.

The deliberate damage to the tanker continued. It turned towards turning the tank into a political pressure card on the Sana’a government by stirring international public opinion.

The evidence is that these steps were followed by the pro-aggression government’s start of a campaign of intimidation of a net threat to the Red Sea and international navigation, followed by warnings and statements by the US, UK, Saudi, UAE and others, in a path that analysts considered as arguments through which these parties are trying to disavow in advance the responsibility for any leakage or explosion that may happen to the floating tank.

While the statements of the UK and US are limited only to the aspects related to the disaster and the possibility of its imminent occurrence, Saudi Arabia (which leads the war coalition in Yemen) described the tanker as a major threat to all countries bordering the Red Sea, making 5 million people in Yemen and Saudi Arabia vulnerable to pollution, within hours in the event of an explosion of the tanker, while about 9.9 million Yemenis and 1.5 million Saudis face the risks of losing their agricultural crops.

These warnings and auctions were associated with the coalition’s refusal to allow the necessary technical repairs to the ship, as well as its refusal to unload it on the pretext that the money that will return from selling the quantities of oil will go to the Central Bank in Sana’a. It also prevented the arrival of any derivatives that would operate the boilers and equipment.

The Ministry of Oil and Minerals in the Sana’a government demanded in May 2019 the United Nations and international organizations to allow the sale of the crude oil contained in the ship Safer, and to benefit from the revenue in establishing alternative oil tanks, but this was rejected.

However, at the same time, the US and UK accused the Sana’a government of preventing maintenance of the ship or access to it.

After a series of urgent demands by the Sana’a government to the United Nations and the international community that SAFER should be repaired, or to convince the coalition to allow diesel and maintenance teams to access the ship, the assessment and maintenance agreement was signed between the United Nations and the Sana’a government in November 2020.

The agreement halted the controversy over who was responsible for obstructing the ship’s maintenance efforts, and shifted the blame to the United Nations; But it was not implemented, and the SAFER issue entered a new period of silence, while the $35 million in funding allocated to implement the agreement went into operational expenses for UNOPS.

The most important thing is: Why did the Safer threat during the years of war and siege keep appearing by strong-worded warnings at times, and disappear at other times, despite its danger to the marine environment in the Red Sea and the coastal communities?
Observers confirmed that those voices raised by the aggression countries were not truthful in those warnings, but rather wanted political pressure on the Sana’a government, as if the danger of the tank has become a war card that the coalition can use at any time in order to achieve its agenda in Yemen geography