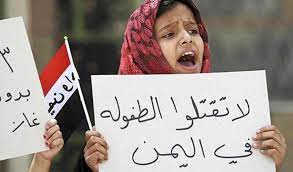 The Supreme Council for Motherhood and Childhood on Sunday organized in Sanaa a rhetorical celebration on the occasion of World Children’s Day, under the slogan “Forgotten Childhood in the Time of Siege”.

At the event, the Deputy Prime Minister for National Vision Affairs, Mahmoud Al-Junaid, indicated that the world’s celebration of the Children’s Day comes in light of a bitter reality for childhood, especially in Yemen in light of the brutal regimes seeking to dominate the world’s capabilities, led by America through false titles related to children, women, and rights and freedoms.

“We consider the commemoration of World Children’s Day an opportunity to reveal to the world the falsity of the allegations, in light of the crimes and violations that Yemeni children and women have been subjected to over eight years of aggression and siege, which have killed, injured and disabled thousands of them,” he said.

Al-Junaid pointed to the continued blockade imposed by the Saudi-led aggression coalition forces to prevent the entry of medicine and food to Yemen’s children. He called on the Supreme Council for Motherhood and Childhood and organizations concerned with children’s and women’s rights to make World Children’s Day a day to expose the aggression coalition’s crimes against Yemeni children.

For her part, the Secretary General of the Supreme Council for Motherhood and Childhood, Akhlaq Al-Shami, explained that the world celebrates its achievements and what it gave to the child at a time when Yemeni children and women are being killed, disabled, injured and displaced as a result of the aggression.

She indicated that the aggression coalition has killed more than 12,000 children, displaced two million Yemeni children, injured and disabled thousands, while educational services deteriorated as a result of the direct targeting of schools and educational facilities.

Al-Shami indicated that the aggression destroyed 51 percent of health facilities, which caused dire consequences for society in general, children and their mothers in particular, and deaths were recorded as a result of diseases that Yemen had declared eradicated, such as measles, polio, cholera and smallpox, because the aggression prevented the entry of 300 types of medicine. She denounced the silence and inaction of the United Nations in this regard.

Advisor to the President of the Supreme Political Council, Ambassador Abdullah Hajar, pointed out that the world’s celebration of the World Children’s Day comes when Yemeni children are subjected to daily crimes and violations that deprive them of all the necessities of life, care and protection.

He pointed out that the Salvation Government seeks to protect and preserve children and provide appropriate health and educational care for them.