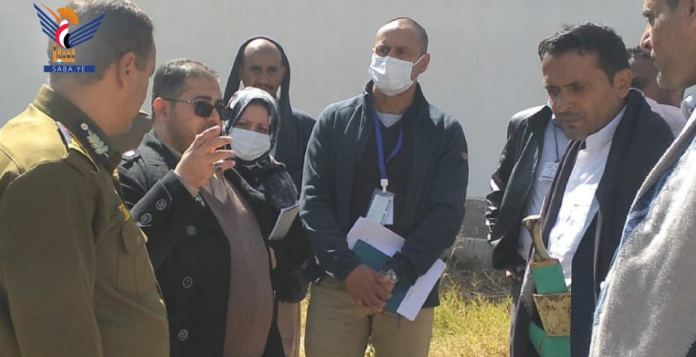 The Minister of Human Rights, Ali Hussein al-Dailami, and the representative of the UN High Commissioner for Human Rights (HCHR), Safeer El Din Sayed, visited on Friday the Central Reformatory Facility in Sana’a.

During the visit, Al-Dailami and Sayed were briefed on the reformatory facilities, projects to develop and modernize its infrastructure, health and educational activities and programs, laboratories, workshops, and training and rehabilitation workshops offered to inmates.

Al-Dailami praised the social initiatives adopted by the reformatory administration in order to return the female prisoners to their families after completing the sentence period, as well as the rehabilitation and vocational training efforts, and the products produced by the inmates inside the reformatory.

He pointed out that the aggression and siege have weighed heavily on all Yemenis, including prison conditions, urging for making more efforts to improve the level of health care, improve nutrition for prisoners, follow up their cases in the prosecutions and courts, release the insolvent, and activate general and technical education for those wishing to enroll in education field.

The Human Rights Minister urged the High Commissioner for Human Rights to assume its responsibilities in conveying the true picture of the reality of prisons, and the official efforts being made to improve their conditions.

He confirmed that the Commission, within its competence, will work on everything that would show the reality of suffering, and ways to improve the level of services in prisons.

Oil Minister: Sana’a Will Not Stand Idly by in Face Of Any Economic Escalation by Aggression