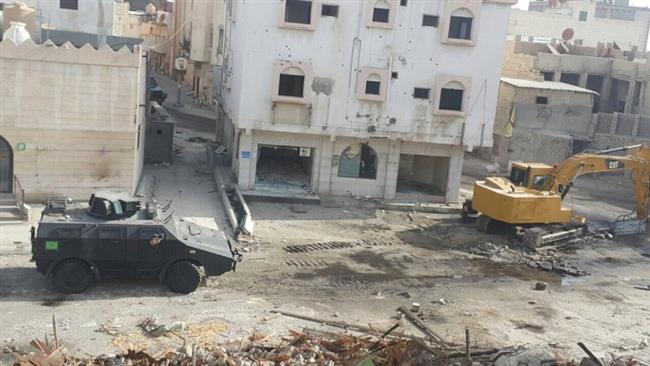 Saudi regime forces have launched a fresh wave of shelling attacks against a besieged town in Al Awamaih located some 390 kilometers northeast of the capital, Riyadh, as a fierce crackdown on protesters there enters its second week

Saudi armored vehicles stormed the al-Jamimah and al-Shokrollah neighborhoods of the town and rained down heavy fire on residential buildings, destroying civilian cars

A number of human rights groups and activists have expressed deep concern regarding the use of violent methods to deal with political dissent in the area, warning about high civilian casualties. They also say locals in Awamiyah are suffering from a severe water shortage and are using private generators to produce electricity.

There has been no precise figure of casualties among the civilians.

Saudi regime forces have been attacking Awamiyah since May 10, after putting the town under a siege, in the wake of fierce clashes with local residents protesting the demolition of the historic al-Mosara neighborhood for a planned development project.

Pictures and videos of bulldozers, escorted by heavily armored military vehicles and heading toward the site, have gone viral.

Since February 2011, Saudi Arabia has stepped up security measures in the Shia-dominated Eastern Province, which has been rocked by anti-regime demonstrations, with protesters demanding free speech, the release of political prisoners, and an end to economic and religious discrimination.

The protests have been met with a heavy-handed crackdown by the Saudi regime. Over the past years, Riyadh has also redefined its anti-terrorism law so as to repress pro-democracy movements.

Trump campaign had at least 18 undisclosed contacts with Russians: Reuters