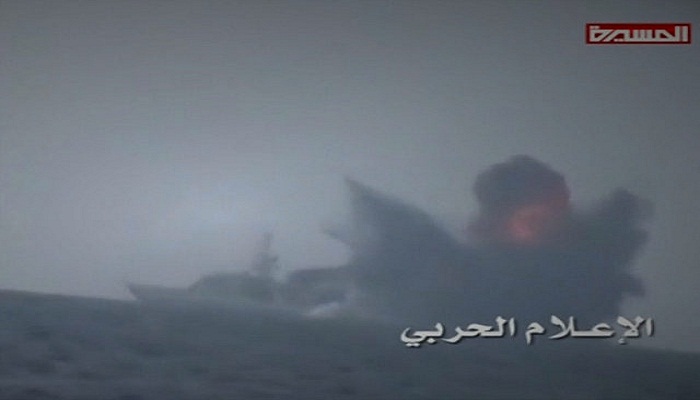 The Yemeni Joint Forces have announced on Wednesday dawn that its Navy bombed battleship for  Saudi-led Coalition when it was reveling  a civil target near to Mukha coast north-western Ta`ze.

Targeting the battleship was a qualitative and sophisticated weapon, according an unnamed military source told Al Masirah Channel website.

There is no further detail about names of a weapon and casualties, but the source confirmed that warship had mounted missile attacks against Yemen’s western coasts, cities and fishermen.

On Jan , Yemeni forces fired a guided missile at Saudi al-Madinah warship in waters near the port city of Hudaydah, located 150 kilometers southwest of the capital Sana’a.

On December 28, 2015, the Yemeni forces destroyed a Saudi-led coalition warship in al-Mukha coast.

On December 5, the Yemeni forces targeted and destroyed a Saudi warship in the waters near Bab al-Mandab Strait.

On November 15, On November 7, and On October 11,Yemeni forces destroyed a Saudi-led coalition warship al-Mukha coast.

On October 25, the Yemeni forces hit and destroyed another Saudi warship in Bab al-Mandab Strait

On October 9, Yemeni Joint forces also fired missiles at a Saudi warship, and destroyed it in Bab al-Mandab Strait.