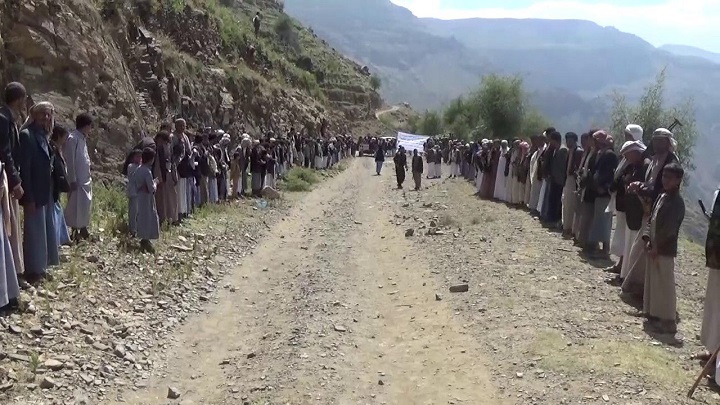 The people of Isleh Bani Ashab in the district of Kahlan Afar held  an armed tribal stand on Wednesday. During the stand, the family of a killed soldier from the Yemeni Joint army, Ayman Ahmed Kahlani, whose from Hajjah province, supplied the battlefronts with an extraordinary convoy consisting of various types of food in the occasion the anniversary of the 21 revolution of September, also known as the Ansarullah revolution. The stand was called” escalation is only faced with escalation”, referring to the Saudi constant war crimes and escalated military operations.

The ceremony was attended by sheikhs and dignitaries of the local councils in the aforementioned province. Moreover, the attendees stressed the necessity of providing the front lines as much as possible. They also affirmed the importance of participating in the massive demonstration that is going to take place tomorrow celebrating the third anniversary of the revolution in the capital Sana’a, a well as to deliver a clear message to the people of all countries in the world.

The family of the killed soldier among the ranks of the Yemeni joint army, currently confronting Saudi forces and paid-militias, displayed a high level of generosity and confirmed their willingness to sacrifice more men and money for the sake of defending Yemen and its sovereignty, local source reported to YemenExtra.

In matter of fact, most Yemeni people are taking their part in the war against the Saudi Kingdom as it first began its war on Yemen on March 26, 2015 and has been accused of perpetrating countless humanitarian violations.