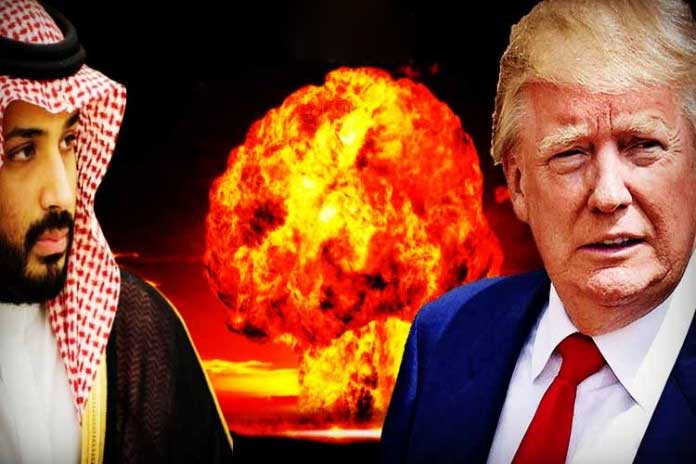 Energy War is Run by US in Yemen; Hadramout instead of the Yemeni Islands

The strategy of the war on Yemen, with the participation of 10 countries and under the leadership of Riyadh, was built on the looting of wealth and the theft of Yemeni lands if it did not return to the House of Obedience.

The information indicates that after the military, political and economic failure in Yemen, day after day, Saudi Arabia in particular and the Alliance in general reveal their true face and ambition in the Yemen war.

In an inconsistent move to the Saudi regime, they removed and uprooted the cement columns that were placed as border markers between Yemen and Saudi Arabia in the desert near the Kharakhir camp in Hadramout, Length 700 km width to the gray triangle on the border of Oman to be replanted again within the province of Hadramout, cutting the distance of 42 thousand square kilometers of the homeland.

Observers believe that this step came for two purposes,
First, Saudi Arabia, after losing most of its southern borders with Yemen (Jizan, Najran and Asir), is somehow trying to force its geographical capacity and only through the Hadramout desert.

Second: Saudi Arabia does not want to be delayed by the Emiratis in annexing the Yemeni territories to it. This is why after the UAE put its hand on the Yemeni ports and islands such as Socotra Archipelago and Myon Island, Saudi Arabia annexed 42,000 square kilometers of Yemeni land in Hadramout province during the months of the war.

It started on 25 March 2015. Bulldozers, heavy transport trucks and hundreds of workers working day and night in a closed area, which prevents them from approaching them after being surrounded by new checkpoints of the Saudi border guards.

The Kharakhir camp, as Riyadh called it in the desert of the Empty Quarter, is no longer the dividing line between Yemen and Saudi Arabia under the Jeddah Treaty of 2000.

The Saudi authorities uprooted the cement columns that were placed as border markers between Yemen and the Kingdom in the desert, near the camp of Kharakhir in Hadramout province, and moved 700 km to the Triangle of Shaiba on the border of Amman, to re-plant it within the province of Hadramout deep 60 km from the previous border markers, Thus cutting 42,000 square kilometers of Yemeni land.

As the information indicates, Saudi Arabia is seeking to extend its oil pipelines from Hadramout to Saudi Arabia in the framework of the looting of the Yemeni wealth and with the approval of the Riyadh hotels government headed by the mouse Hadi, and this process is sponsored and protected by the US, and between the Sharurah and Khrakhir, there is a US military base for unmanned aircraft , And the support and support and logistics services to the coalition, which is fighting in Yemen under the pretext of the restoration of legitimacy

According to intelligence information, the operations of the US drone in Yemen are not to fight terrorism or to return legitimacy. Hadi admitted that he was surprised by the so-called “storm of firmness” and that the attack by Washington against al-Qaeda is merely a media noise that justifies its existence In Yemen and the looting of its wealth, whether in the name of fighting terrorism or through the UAE and Saudi Arabia, and the second is the liquidation of some leaders and tribal leaders Yemeni tribes that oppose this scheme and the project both in the north and in the south.

To confirm this, Western and American media have repeatedly noted that US drone aircraft target innocent Yemeni citizens of al-Qaeda.
Finally,
The play taken by America to justify its presence in the region, whether in Yemen or Iraq or Syria or other countries, is exposed to Arab and Western public opinion and seeks through this play to loot and steal the wealth in the region and the most important of which are the sources of energy (oil and gas) The most important waterways to export them so that it can revive its dead economy.