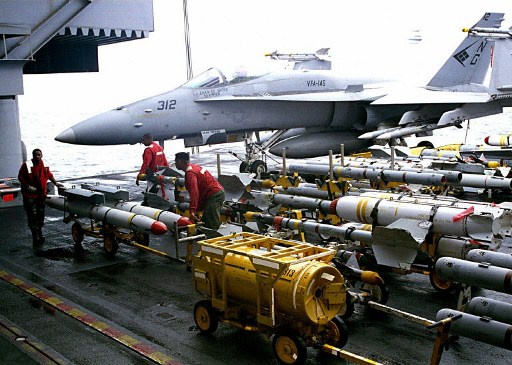 The Saudi Army and its militants have been continuing to carry out more air raids on civilians target in Yemen, committing horrific crimes against Yemeni children and women with U.S. and UK bombs, which has caused widespread tension and concerns amid these countries political elites.

Sources at the Yemeni Military Media have accused the United States, Britain and France of continuing smuggle more arms and bombs to Saudi Arabia and United Arab Emirates in order to defeat the brave will of to break the Yemeni people whom are determined to defeat the invaders.

Saudi Arabia continues to bring in more weapons from U.S. by singing up more arms deals with it, due to its military failure in Yemen as well as Bahrain and Qatar, but with more focus the war of Yemen.

Human rights activists have launched a ” Campaign Against Arms Trade” (CAAT) launched in UK, calling on the the judicial to review their government’s decision to continue buying weapons to Saudi Arabia, despite the widespread concern over the civilian death toll of its three-year bombing campaign in Yemen.

The UK government’s arms sales to Saudi Arabia have come under sustained scrutiny from NGOs and MPs since the start of the campaign in Yemen, where the Saudi-led bombing campaign is accused of killing civilians and damaging vital infrastructure. But the kingdom is the UK’s largest weapons client and has bought more than £3 bn of British arms in the past three years.

CAAT presented “many hundreds of pages” of reports from the UN, European parliament, Red Cross, Medicines Sans Frontiers, Amnesty International and others documenting airstrikes on schools, hospitals and a water well in Yemen, as well as incidents of mass civilian casualties. High court has concluded that Britain acted lawfully over weapons sales, but judgment will do little to help end war in Yemen.

The Saudis are considered to be one of the largest arms buyers in Britain, but the increase in arms deals with other countries reflects a shift in emphasis from the government, which wants to support the British arms industry, which employs more than 55,000 people.
Where Saudi Arabia hold a deal with USA ($350 billion) over the coming ten years. It was the biggest deal in world history, the deal included tanks, combat ships, missile defense systems, radars, communication technology and cyber-security, as the two countries mark a new chapter in their relationship.

Germany has signed large arms deals with Saudi Arabia in recent years, but on the backdrop of the crimes committed by Saudi Arabia in Yemen, in a new step for the German government, the negotiators of the Christian Alliance and the Social Democratic Party unanimously agreed on Friday (January 12th) suspended arms exports to the parties in the conflict of Yemen. “The German government will immediately ban the export of arms to countries as long as they participate in the Yemen war,” the memorandum said.

The dove of peace “Norway” has suspended exports of weapons and ammunition to the United Arab Emirates (UAE) over concerns they could be used in the war in Yemen. The Scandinavian country said while there was no evidence Norwegian-made ammunition had been used in the devastating conflict, which is nearing three years, there was a high risk related to the UAE’s military involvement there.

Finally:
Why are these steps come (stop exporting arms) to the UAE and Saudi Arabia? Is this step to escape from the international courts in the future or have a human background? And if they have a human background, where were they over three years of using these weapons to kill more women and children and unarmed people? But the army and the popular committees during these three years since the aggression crushed the pride of US-Western industries used by the coalition.