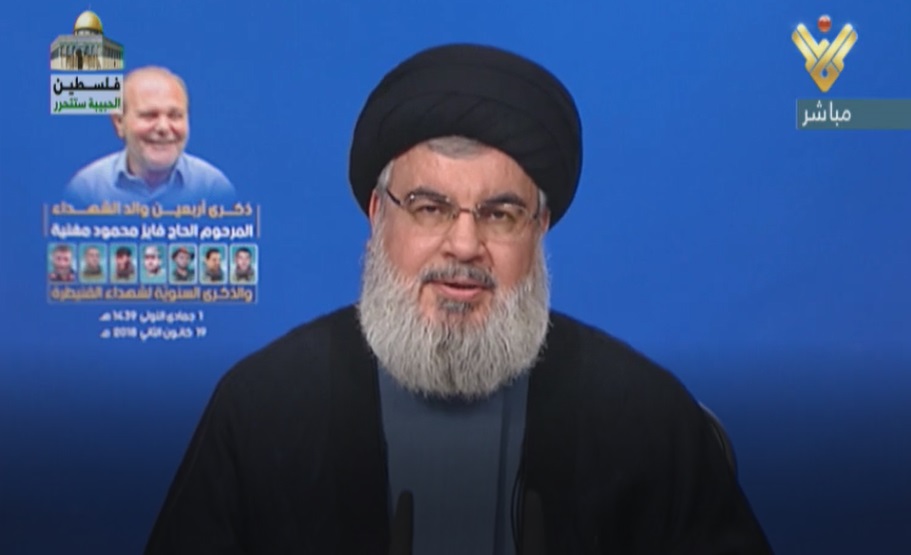 Hezbollah Secretary General Sayyed Hasan Nasrallah on Friday warned the Zionist enemy against constructing a separation wall at the 13 controversial positions along the Lebanese-Palestinian border, stressing that the Islamic Resistance backs the government which rejected the Israeli measure.

Delivering a speech during Hezbollah ceremony to mark the 40th day after the death of Hajj Fayez Moughniyeh and the anniversary of the Islamic Resistance’s martyrs in the Syrian province of Quneitra, Sayyed Nasrallah maintained that the recent blast which targeted one of Hamas commanders in southern Lebanon (Sidon) indicates a dangerous Israeli prospect of tampering with the country’s security, adding that the Lebanese political officials must deal with the incident seriously and hailing the efforts made the national security agencies in face of this development.

“When the investigations into the blast are concluded and the Israeli involvement is confirmed, all the political factions must take a serious stance against the Zionist escalation.”

Stressing the importance of avoiding all the forms of normalizing ties with the Zionist entity Hezbollah leader also warned against the attempts made by some Lebanese, especially after the recent events in the occupied Palestine, to take certain initiatives in this context after they gain support from some Lebanese officials.

Sayyed Nasrallah called on banning all the movie productions of the American director Steven Allan Spielberg who paid one million dollars to the Zionist enemy in 2006 to support it in its war on Lebanon.

“The Post is about Vietnam, yet the money paid to watch the movie may be used by Spielberg to fund any Zionist war against Lebanon.”

“We aren’t against art, cinema or TV, but don’t simplify things. There is a Lebanese decision to boycott Israel so commit to your decisions.”

Sayyed Nasrallah said that the US accusations against Hezbollah of being involved in drug trade are baseless, stressing that the party considers it as religiously prohibited even in dealing with the enemy.

Sayyed Nasrallah also underscored that Hezbollah has always avoided all the forms of commercial and business investments, adding that US Justice Ministry aims at starting an investigation into Hezbollah involvement in criminal acts to classify it as a criminal organization.

The US accusations aim at deforming Hezbollah reputation according to Sayyed Nasrallah who stressed that the American themselves are involved in drug dealing crimes committed to destroy various communities.

On the upcoming Lebanese parliamentary elections, Sayyed Nasrallah considered that the political tension caused by the democratic event must be kept regulated, adding that Lebanon can never be ruled according to the principle of the majority and minority.

“This country can only continue through dialogue, integration and coexistence, not through elimination and marginalization.”

Hezbollah described the claims made by the US officials as hypocritical, calling on them to stop asking their allies to fund ISIL takfiri group.

As we reject to describe the US terror as Christian, the Christians must reject the term “Islamic Terror” which is deliberately used by Trump to stigmatize Islam and Prophet Muhammad (PBUH) as terrorist, according to Sayyed Nasrallah.

Since Trump Jerusalem recognition, the US administration seeks eradicating the Palestinian cause in alliance with some Arab ruling dynasties who exert pressures on the Palestinians to abandon their rights and accept the so-called “The Century’s Deal” which gives them only crumbs, Sayyed Nasrallah said.

His eminence added all the bets are on the Palestinians and their Intifada as well as what happened in Nablus in Jenin to frustrate the US schemes.

Sayyed Nasrallah started his speech by stressing that the sacrifices made by the martyrs and fighters as well as their families across the regional countries in face of the US-Zionist schemes and the takfiri terror have led to all the gained achievements, including security, stability and liberation.

“Lebanon has fortified its security thanks to the martyrs’ sacrifices.”

His eminence also highlighted the role of Hajj Fayez Moughniyeh in supporting the resistance as he sacrifices all his three sons as martyrs: Imad, Jihad and Foad, adding that the late father belonged to the generation which used to spread the religious and moral values and strive to provide families with basic needs.

Sayyed Nasrallah finally stressed that Hezbollah will always confront the US-Zionist schemes and achieve victories whatever the sacrifices required are.