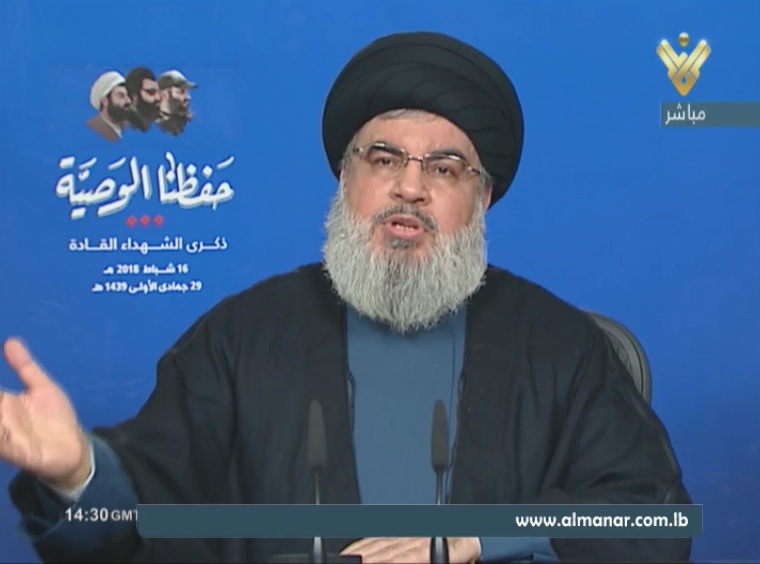 Sayyed Nasrallah: We can Disable Israel’s Offshore Installations within Hours

Sayyed Nasrallah began his speech with pointing to the logo of this year’s anniversary, saying: “Indeed we kept the pledge as we are almost getting out of the harshest regional war, we kept it after July war. Our leaders, the resistance was your will and belief, in 2018, the resistance remains the pledge, and we are following your path.”

“It seems that the entire region has entered the oil and gas battle,” Sayyed Nasrallah said, pointing to huge quantities of oil in the occupied Golan. “The Zionist entity has launched the battle over Block 9 since there are reports about huge quantities of oil in Golan with ‘Israel’ exploiting Trump’s presidency to get a UN resolution on annexing the Golan,” His eminence said, adding that one of the reasons for the war against Syria is the oil wealth found in its land and sea.

“As for the US occupation of eastern Syria, the Americans had said that they would leave the area once ISIL is defeated, however, they are currently protecting ISIL’s small presence there,” Hezbollah’s S.G. said. “The Americans don’t want to withdraw from eastern Syria because the most important oil and gas fields are found there,” his eminence said, adding that the US runs the oil and gas battle in the region. He also warned Kurds to take lesson from previous incidents, assuring them that the US is using them and will eventually abandon them.

Sayyed Nasrallah also pointed out that Trump sees Iraq as an oil field, adding that even the Gulf crisis was because some states wanted to control Qatar’s gas reserves.”

“The oil wealth in the South, like the rest of Lebanon’s wealth, belongs to all Lebanon and will go to the state funds. The oil and gas reserves may be the only hope for economic relief,” Sayyed Nasrallah said, considering that the main reason behind the current conflict is not the territorial border, whose dispute can be easily resolved. “The main issue is the maritime border.”

Concerning the Israeli construction of a wall on the border with Lebanon, Hezbollah leader said a misunderstanding shall reveal, “so far, ‘Israel’ has not built its wall on Lebanese soil, however, the problem will start when the construction begins on the Lebanese land. “The Lebanese have so far been unified over this issue, Sayyed Nasrallah said, hailing the unified official and popular stance. “The Lebanese must not allow the devils to sow discord, and by devils I mean the Americans,” referring to the intensified US visits to Lebanon, U.S. Secretary of State Rex Tillerson and Assistant Secretary of State David Satterfield, in an attempt to mediate over offshore gas and oil rights.

“State institution must be at the level of trust and honesty in this critical file and should approach the file from a strong position with all what we have of strong capabilities.” “Let the state accept the mediator it wants and we will not put a veto, but the Americans are not impartial mediators, especially when the other party is the Israeli entity. The Lebanese people look forward to the state and we support it, so it must have a firm, brave position.”

Sayyed Nasrallah ridiculed the US way of negotiating, saying “the US wants to give us our basic right, the land, to take our hard right, water,” pointing that “Lebanon must tell US to demand concessions on border dispute to restrain Hezbollah from attacking ‘Israel’.”

“Should the Higher Defense Council decide that Israel’s offshore oil installations should cease to operate, I promise you that we can disable them within hours,” his eminence threatened.

Hezbollah’s S.G. described Syria’s downing of an Israeli F16 aircraft as a qualitative military achievement. “Israel is no more free to operate in the skies, the situation has changed.”
But his eminence rebuffed claims that the plane was downed by Iran or Russia, saying “the decision to shoot down the plane was taken by the Syrian leadership and President Bashar al-Assad,” adding that Syrian officers and soldiers were the ones who executed the order.

“$3 billion is the amount of aid allocated to ‘Israel’ by the Pentagon, their aircrafts are open to the Israeli enemy but forbidden to Lebanon,” Sayyed Nasrallah said, reminding of Israel’s expansionist ambitions. “We must remain vigilant. I’m not saying that we’re heading to a war but vigilance is needed. What prevents Israel from waging a war is its inability to make sure that it would emerge victorious in advance.”

Sayyed Nasrallah congratulated Iran on the revolution’s anniversary, “We are proud allies of Iran, Tehran does not interfere in Lebanese affairs at all. Iran does not detain a Lebanese premier!”

His eminence touched upon the Bahraini evolution on its seventh anniversary, saying “seven years have passed since the revolution in Bahrain and demonstrations haven’t stop despite all that happened, nevertheless, Bahrainis insist on their rights.” “There is a demographic change in Bahrain and the regime in Bahrain gives nationalities to all peoples of the world and withdraws citizenship from the original people of Bahrain, even the rulers are not from the original people of Bahrain.”

On Yemen, Sayyed Nasrallah said there was nothing new there, “but in the face of global silence, there are a few voices in the Arab world speaking out about the injustice against the Yemenis and they want to silence these voices by any means.”

Turning to local issues, Sayyed Nasrallah hailed the new electoral law as one of the most important achievements in the country and that it was the best law in the history of Lebanon.

Sayyed Nasrallah assured some parties that Hezbollah was not seeking the parliamentary majority in Lebanon.
“To Mustaqbal leaders I tell you stay calm, we didn’t call for your coalition in the first place!” he said, assuring that Hezbollah’s electoral battle was not aimed against anyone.
“Our political alliance with the Free Patriotic Movement is strong and steadfast. On the electoral level, we are free and we can coalesce in some areas and compete in other,” his eminence said.